Biologically, an adult is an organism that has reached sexual maturity. In human context, the term adult additionally has meanings associated with social and legal concepts. In contrast to a "minor", a legal adult is a person who has attained the age of majority and is therefore regarded as independent, self-sufficient, and responsible. The typical age of attaining legal adulthood is 18, although definition may vary by legal rights and country.

Human adulthood encompasses psychological adult development. Definitions of adulthood are often inconsistent and contradictory; a person may be biologically an adult, and have adult behavior but still be treated as a child if they are under the legal age of majority. Conversely, one may legally be an adult but possess none of the maturity and responsibility that may define an adult character.

In different cultures there are events that relate passing from being a child to becoming an adult or coming of age. This often encompasses the passing a series of tests to demonstrate that a person is prepared for adulthood, or reaching a specified age, sometimes in conjunction with demonstrating preparation. Most modern societies determine legal adulthood based on reaching a legally specified age without requiring a demonstration of physical maturity or preparation for adulthood. 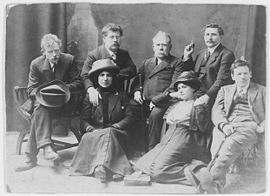 A group of adult people

Historically and cross-culturally, adulthood has been determined primarily by the start of puberty (the appearance of secondary sex characteristics such as menstruation in women, ejaculation in men, and pubic hair in both sexes).[1] In the past, a person usually moved from the status of child directly to the status of adult, often with this shift being marked by some type of coming-of-age test or ceremony.[2]

After the social construct of adolescence was created, adulthood split into two forms: biological adulthood and social adulthood. Thus, there are now two primary forms of adults: biological adults (people who have attained reproductive ability, are fertile, or who evidence secondary sex characteristics) and social adults (people who are recognized by their culture or law as being adults). Depending on the context, adult can indicate either definition.

Although few or no established dictionaries provide a definition for the two word term biological adult, the first definition of adult in multiple dictionaries includes "the stage of the life cycle of an animal after reproductive capacity has been attained".[3][4] Thus, the base definition of the word adult is the period beginning at physical sexual maturity, which occurs sometime after the onset of puberty. Although this is the primary definition of the base word "adult", the term is also frequently used to refer to social adults. The two-word term biological adult stresses or clarifies that the original definition, based on physical maturity, is being used.

Legally, adulthood typically means that one has reached the age of majority – when parents lose parenting rights and responsibilities regarding the person concerned. Depending on one's jurisdiction, the age of majority may or may not be set independently of and should not be confused with the minimum ages applicable to other activities, such as engaging in a contract, marriage, voting, having a job, serving in the military, buying/possessing firearms, driving, traveling abroad, involvement with alcoholic beverages, smoking, sexual activity, gambling, being a model or actor in pornography, running for President, etc. Admission of a young person to a place may be restricted because of danger for that person, concern that the place may lead the person to immoral behavior or because of the risk that the young person causes damage (for example, at an exhibition of fragile items).

One can distinguish the legality of acts of a young person, or of enabling a young person to carry out that act, by selling, renting out, showing, permitting entrance, allowing participation, etc. There may be distinction between commercially and socially enabling. Sometimes there is the requirement of supervision by a legal guardian, or just by an adult. Sometimes there is no requirement, but rather a recommendation.

Using the example of pornography, one can distinguish between:

With regard to films with violence, etc.:

The age of majority ranges internationally from ages 15 to 21, with 18 being the most common age. Nigeria, Mali, Democratic Republic of Congo and Cameroon define adulthood at age 15, but marriage of girls at an earlier age is common.[10]

In most of the world, including most of the United States, India and China, the legal adult age is 18 (historically 21) for most purposes, with some notable exceptions:

In contrast to biological perspectives of aging and adulthood, social scientists conceptualize adulthood as socially constructed.[12][13] While aging is an established biological process, the attainment of adulthood is social in its criteria. In contrast to other perspectives that conceptualize aging and the attainment of adulthood as a largely universal development, regardless of context, nation, generation, gender, race, or social class. Social scientists regard these aspects as paramount in cultural definitions of adulthood.[14]

Further evidence of adulthood as a social construction is illustrated by the changing criteria of adulthood over time. Historically, adulthood in the U.S. has rested on completing one's education, moving away from the family of origin, and beginning one's career.[15][16][17] Other key historical criteria include entering a marriage and becoming a parent. These criteria are social and subjective; they are organized by gender, race, ethnicity, social class, among other key identity markers. As a result, particular populations feel adult earlier in the life course than do others.[18][19][20][21]

Contemporary experiences of and research on young adults today substitute more seemingly subjective criteria for adulthood which resonate more soundly with young adults' experiences of aging.[19][22] The criteria are marked by a growing "importance of individualistic criteria and the irrelevance of the demographic markers of normative conceptions of adulthood."[23]:230 In particular, younger cohorts' attainment of adulthood centers on three criteria: gaining a sense of responsibility, independent decision-making, and financial independence.[24][25]

According to Jewish tradition, adulthood is reached at age 13 (the minimum age of the Bar Mitzvah or Bat Mitzvah) for Jewish boys and girls; they are expected to demonstrate preparation for adulthood by learning the Torah and other Jewish practices. The Christian Bible and Jewish scripture contain no age requirement for adulthood or marrying, which includes engaging in sexual activity

The 1983 Code of Canon Law states, "A man before he has completed his sixteenth year of age, and likewise a woman before she has completed her fourteenth year of age, cannot enter a valid marriage".[26] According to The Disappearance of Childhood by Neil Postman, the Christian Church of the Middle Ages considered the age of accountability, when a person could be tried and even executed as an adult, to be age 7.