Adolfo Suárez González, 1st Duke of Suárez (Spanish pronunciation: [aˈðolfo ˈswaɾeθ]; 25 September 1932 – 23 March 2014) was a Spanish lawyer and politician. Suárez was Spain's first democratically elected Prime Minister since the Second Spanish Republic and a key figure in the country's transition to democracy after the dictatorship of Francisco Franco.

When Spain was still an autocratic regime, he was appointed Prime Minister by King Juan Carlos in 1976, hoping that his government could bring about democracy. At the time of his appointment, he was not a well-known figure, making many political forces skeptical of his government. However, he oversaw the end of the Francoist Cortes, and the legalisation of all political parties (including the Communist Party, a particularly difficult move). He led the Union of the Democratic Centre and won the 1977 general election. In 1981, he resigned and founded the party Centro Democrático y Social (CDS), which was elected to the Cortes numerous times. He retired from politics in 1991 and from public life in 2003, due to Alzheimer's disease.

Adolfo Suárez González was born on 25 September 1932 in Cebreros in the Province of Ávila of Spain,[1] the eldest son of Hipólito Suárez Guerra, a lawyer, and Herminia González Prados.[2][3][4] Both of his parents supported the Republicans during the Spanish Civil War.[5] At the age of 18, Suárez was president of the Ávila chapter of Catholic Action.[1] Suárez studied law at the University of Salamanca, after which he took a job at the municipal government of Ávila in 1955. He subsequently became a member of Opus Dei, and obtained a doctorate at the Central University of Madrid.[6][7] He also worked briefly as a porter at Madrid's Atocha railway station.[1]

In 1958, Suárez became the personal secretary of Fernando Herrero Tejedor, the newly appointed civil governor of Ávila. When Tejedor was made deputy secretary-general of the Movimiento Nacional in 1961, Suárez became his chef de cabinet.[1][2][6] He gradually rose through the ranks of the Movimiento. In 1965, Suárez was appointed programme director of the state broadcaster Radio y Televisión Española (RTVE). In 1967, he was elected to the Francoist Cortes.[6] In 1968, Suárez was promoted to civil governor and provincial head of the Movimiento in Segovia.[7] In 1969, he was made director general of RTVE. Under this capacity, he became a close friend to future king Prince Juan Carlos.[1][6]

In July 1976, King Juan Carlos requested the resignation of Arias. The relatively obscure Suárez was chosen as the new Prime Minister of Spain, surprising many observers.[6] At the age of 43, he was Spain's youngest prime minister in the 20th century.[7] Due to his Francoist ties, Suárez enjoyed the trust of the political right, while the reformists were dismayed by his appointment.[8][9] Nevertheless, it was noted that due to his age, Suárez was not as strongly associated with the bloody Civil War or the most brutal years of Franco's rule as the older politicians.[2][8]

Within a year of his appointment, Suárez had rapidly introduced reform measures and taken decisive steps in Spain's transition to democracy (La Transición). The Political Reform Act, which permitted universal suffrage and established the basis for a new, bicameral parliament, was passed by a huge majority in the Francoist Cortes in November 1976 and overwhelmingly approved by a referendum in December.[6][9] Suárez managed to placate the conservative military officers, while also reaching out to Felipe González's Spanish Socialist Workers' Party (PSOE) and later, Santiago Carrillo's Communist Party of Spain (PCE).[6] Between February and April 1977, the PSOE and the PCE were both legalised, trade unions were recognised, and the Movimiento was abolished.[9] The legalisation of the PCE in particular provoked fury in the Spanish military; Suárez responded by sacking hardliners and promoting more liberal officers such as Manuel Gutiérrez Mellado.[5] On 15 June, Suárez led the Union of the Democratic Centre (Unión de Centro Democrático, UCD) to victory in Spain's first free elections in 41 years, and became the first democratically elected prime minister of the post-Francoist Spain.[9]

Suárez's centrist government instituted further democratic reforms. A new constitution, which recognised Spain as a constitutional monarchy, was approved by a referendum in December 1978.[9] In an effort to address separatist tensions and calls for increased local autonomy, Suárez also negotiated the creation of Spain's autonomous communities. Suárez's coalition won the 1979 elections under the new constitution.[6]

Suárez's political power eroded as he struggled to deal with economic recession, mounting violent activity by ETA, calls for further regional autonomy and divisions within his own party. He became increasingly withdrawn from governance, partly due to a chronic dental condition. He survived a motion of no confidence presented by Felipe González and the PSOE in May 1980.[6] In January 1981, trailing in the polls behind the PSOE and faced with a revolt within the UCD, Suárez announced his resignation as prime minister.[2] A month later, as parliament took the vote to confirm Suárez's successor Leopoldo Calvo-Sotelo, Lieutenant-Colonel Antonio Tejero and around 200 Civil Guards stormed the chamber in an attempted coup and held the lawmakers hostage for some 22 hours.[7] Suárez, along with two other parliamentarians, exhibited defiance by remaining calmly seated during the panic.[6] The 23-F coup attempt ("El Tejerazo") failed as it was denounced by King Juan Carlos I in a televised address and promised military support failed to materialise.[7]

In 1982, Suárez founded the Democratic and Social Centre (Centro Democrático y Social, CDS) party, which never achieved the success of UCD, though Suárez and its party were important elements in the Liberal International, joining it in 1988, leading to it being renamed Liberal and Progressive International, and Suárez became President of the Liberal International in 1988.[10] He retired from active politics in 1991, for personal reasons.[6]

In 1981, Suárez was raised into the Spanish nobility by King Juan Carlos of Spain and given the hereditary title of "Duque de Suárez" (Duke of Suárez), together with the title Grande de España (English: Grandee of Spain) following his resignation as Prime Minister and in recognition of his role in the transition to democracy. Suárez was awarded the Príncipe de Asturias a la Concordia in September 1996 for his role in Spain's early democracy. On 8 June 2007, during the celebration of the 30th anniversary of the first democratic elections, King Juan Carlos appointed Suárez the 1,193rd Knight of the Order of the Golden Fleece.[11] He was also a member of the Club de Madrid, an independent organization (based in Madrid) that is composed of more than 80 former democratic Prime Ministers and Presidents. The group works to strengthen democratic governance and leadership.[12] 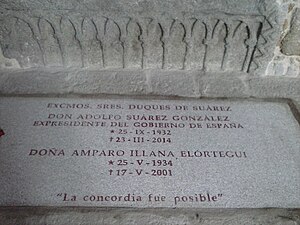 Suarez's grave in the cloister of Ávila Cathedral

On 31 May 2005, Suárez's son, Adolfo Suárez Illana, announced on Spanish television that his father was suffering from Alzheimer's disease. The announcement followed speculation about Suárez's health in the Spanish media. On 21 March 2014, his son announced that his death from neurological deterioration was imminent.[13] Suárez then died as a result of a respiratory infection on 23 March 2014 in a clinic in Madrid.[14] Suarez was given a state funeral and was buried in the cloister of Ávila Cathedral.

Pope Francis shared his condolences, saying: "In fraternal suffrage with you all, I make fervent prayers to the Lord for the eternal rest of this esteemed and feature figure of the recent history of Spain."

On 26 March 2014, the Spanish government decided to rename the Madrid-Barajas airport to Adolfo Suárez Madrid-Barajas in honour of his service to the country.[15]

The duke's middle daughter, Laura, was born in 1966. Suarez' youngest daughter, María Sonsoles Suárez Illana (born in Madrid in 1967), became a TV news anchor for Antena 3 and married José María Martínez-Bordiú y Bassó de Roviralta (a nephew of Cristóbal Martínez-Bordiú, the son-in-law of Francisco Franco); the couple is without issue.

Suárez's eldest son, Adolfo Suárez Illana, was a politician, who now practises law and is heavily involved with the world of bullfighting and has two sons. Suárez had two more children, his daughter Laura and his son Francisco Javier; both remain unmarried.[contradictory]