Adolf Franz Karl Viktor Maria Loos[1] (German pronunciation: [ˈaːdɔlf loːs]; 10 December 1870 – 23 August 1933) was an Austrian architect and influential European theorist of modern architecture. His essay Ornament and Crime advocated smooth and clear surfaces in contrast to the lavish decorations of the fin de siècle, as well as the more modern aesthetic principles of the Vienna Secession, exemplified in his design of Looshaus, Vienna. Loos became a pioneer of modern architecture and contributed a body of theory and criticism of Modernism in architecture and design and developed the "Raumplan" (literally spatial plan) method of arranging interior spaces, exemplified in Villa Müller in Prague.

Loos had three tumultuous marriages that all ended in divorce. He suffered from poor health, including an inherited hearing affliction. He was convicted as a pedophile in 1928 for exploiting girls from poor families, aged 8 to 10. He died aged 62 on 23 August 1933 in Kalksburg near Vienna.

Loos was born on 10 December 1870 in Brno, in the Margraviate of Moravia region of the Austro-Hungarian Empire, today the eastern part of the Czech Republic. His father, a German stonemason, died when Loos was nine years old.[2] Young Adolf Loos had inherited his father's hearing impairment and was significantly handicapped by it throughout his life. His mother continued to carry on the stonemason business after her husband's death. Loos attended several Gymnasium schools, a technical school in Liberec and graduated 1889 from a technical school in Brno. He later studied at Dresden University of Technology. He left one year later without completing his study.

At age 23, Loos traveled to the United States and stayed there for three years from 1893–96. While in the United States, he mainly lived with relatives in the Philadelphia area, supported himself with odd jobs and also visited other cities such as the World's Columbian Exposition in Chicago, St. Louis and New York. Loos returned to Vienna in 1896 and made it his permanent residence. He was a prominent figure in the city and a friend of Ludwig Wittgenstein, Arnold Schönberg, Peter Altenberg and Karl Kraus.

Inspired by his years in the New World he devoted himself to architecture. After briefly associating himself with the Vienna Secession in 1896, he rejected the style and advocated a new, plain, unadorned architecture. A utilitarian approach to use the entire floor plan completed his concept. Loos's early commissions consisted of interior designs for shops and cafés in Vienna.

Loos authored several polemical works. In Spoken into the Void, published in 1900, he attacked the Vienna Secession, at a time when the movement was at its height.[3]

In his essays, Loos used provocative catchphrases and is noted for the essay/manifesto entitled Ornament and Crime, given in a lecture in 1910 and first published in 1913.[4] He explored the idea that the progress of culture is associated with the deletion of ornament from everyday objects, and that it was therefore a crime to force craftsmen or builders to waste their time on ornamentation that served to hasten the time when an object would become obsolete (design theory). Loos' stripped-down buildings influenced the minimal massing of modern architecture, and stirred controversy. Although noted for the lack of ornamentation on their exteriors, the interiors of many of Loos's buildings are finished with rich and expensive materials, notably stone, marble and wood, displaying natural patterns and textures in flat planes, executed in first rate craftsmanship. The distinction is not between complicated and simple, but between "organic" and superfluous decoration.

Loos was also interested in the decorative arts, collecting sterling silver and high quality leather goods, which he noted for their plain yet luxurious appeal. He also enjoyed fashion and men's clothing, designing the famed Kníže of Vienna, a haberdashery. His admiration for the fashion and culture of England and America can be seen in his short-lived publication Das Andere, which ran for just two issues in 1903 and included advertisements for 'English' clothing.[3] In 1920, he had a brief collaboration with Frederick John Kiesler - architect, theater and art-exhibition designer.

Loos House and other projectsEdit

From 1904 on, he was able to carry out big projects; the most notable was the so-called "Looshaus" (built from 1910–12), originally for the Viennese tailor Goldman and Salatsch, for whom Loos had designed a store interior in 1898, and situated right across from the Habsburg city residence Hofburg Palace. The house, today located at the address Michaelerplatz 3, Vienna, and under monument preservation, was criticized by its contemporaries. The facade was dominated by rectilinear window patterns and a lack of stucco decoration and awnings, which earned it the nickname "House without Eyebrows"; Emperor Franz Joseph I of Austria was said to have despised the modern building so much that he avoided leaving the Hofburg Palace through a main gate in its vicinity.[5] His work also includes the store of the men's fashion house Knize (built 1909–13), Am Graben 13, Café Museum (built 1899), Operngasse 7, Vienna, and the "American Bar" (built 1907–08), Kärntnerstrasse 10, Vienna.[6]

Loos visited the island of Skyros in 1904 and was influenced by the cubic architecture of the Greek islands. When the Austro-Hungarian Empire collapsed after World War I Loos was awarded Czechoslovakian citizenship by President Masaryk.[2] His main place of residence remained in Vienna. During the First Austrian Republic Loos became interested in public projects. He designed several housing projects for the City of Vienna, which was then nicknamed Red Vienna. From 1924–28 Loos lived in Paris. He taught at the Sorbonne and was contracted to build a house for Tristan Tzara, which was completed 1925 on Avenue Junot 15, Paris. In 1928 he returned to Vienna.

Loos had an admiration for classical architecture,[7] which is reflected in his writings and his entry to the 1922 Chicago Tribune competition. Loos' submission was a massive doric column.[8]

Loos was married three times. In July 1902, he married drama student Lina Loos [de]. The marriage ended three years later in 1905. In 1919, he married 20-year-old Austrian-born Elsie Altmann, a dancer and operetta star and daughter of Adolf Altmann and Jeannette Gruenblatt. They divorced seven years later in 1926. In 1929 he married writer and photographer Claire Beck. She was the daughter of his clients Otto and Olga Beck, and 35 years his junior. They were divorced on 30 April 1932.[9] Following their divorce, Claire Loos wrote Adolf Loos Privat, a literary work of snapshot-like vignettes about Loos's character, habits and sayings, published by the Johannes-Presse in Vienna in 1936. The book was intended to raise funds for Loos's tomb.

All his life, Loos suffered from a hearing impairment. When he was a child, he was deaf. He only acquired partial hearing at the age of 12.[10] In 1918 Loos was diagnosed with cancer. His stomach, appendix and part of his intestine were removed. By the time he was 50 he was nearly deaf.

In 1928 Loos was disgraced by a pedophilia scandal in Vienna. He had commissioned young girls, aged 8 to 10, from poor families to act as models in his studio. The indictment stated that Loos had exposed himself and forced his young models to participate in sexual acts. He was found partially guilty in a court decision of 1928.[11] In 2008 the original case record was rediscovered and confirmed the accusation.[12][13] 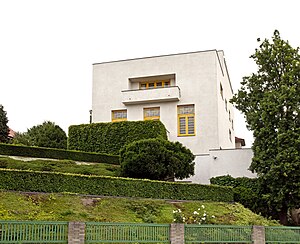 Adolf Loos exhibited early signs of dementia around the time of his court proceedings. A few months before his death he suffered a stroke. He died aged 62 on 23 August 1933 in Kalksburg near Vienna.[14] Loos's body was taken to Vienna's Zentralfriedhof to rest among the great artists and musicians of the city, including Schoenberg, Altenberg and Kraus, some of his closest friends and associates.[9]

Through his writings and his groundbreaking projects in Vienna, Loos was able to influence other architects and designers, and the early development of Modernism. His careful selection of materials, passion for craftsmanship and use of 'Raumplan'—the considered ordering and size of interior spaces based on function—are still admired.[15] 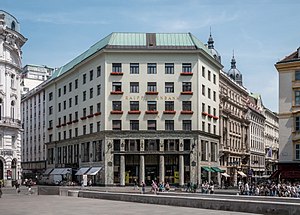