Khashoggi was born in Mecca, to Mohammad Khashoggi, who was King Abdul Aziz Al Saud's personal doctor,[6] and Samiha Ahmed. His father was Turkish and was from a family with roots in Kayseri;[7] their family surname, Khashoggi, means "spoon maker" (Kaşıkçı) in the Turkish language.[7] He also claimed that he had a Jewish grandfather.[8] Khashoggi's sister was author Samira Khashoggi who married businessman Mohamed Al-Fayed and was the mother of Dodi Fayed.[9] Another sister, Soheir Khashoggi, is a well-known Arab novelist (Mirage, Nadia's Song, Mosaic).[9] He was an uncle of journalist Jamal Khashoggi.

Khashoggi was educated at Victoria College in Alexandria, Egypt,[6] and the American universities California State University, Chico, Ohio State University, and Stanford University. Adnan Khashoggi left his studies in order to seek his fortune in business.[10]

Khashoggi's early years were spent among some of Saudi Arabia's most influential figures. "While attending school he met Hussein bin Talal, the future King of Jordan. It was at school that Khashoggi first learned the commercial value of facilitating a deal, bringing together a Libyan classmate whose father wanted to import towels with an Egyptian classmate whose father manufactured towels, earning US$1,000 for the introduction. Khashoggi's subsequent education at university would serve as a launchpad for his commercial career."[12][13]

In one of his first big deals, a large construction company was experiencing difficulties with the trucks that it used on the shifting desert sands. Khashoggi, using money given to him by his father for a car, bought a number of Kenworth trucks, whose wide wheels made traversing the desert considerably easier. Khashoggi made his first US$250,000 leasing the trucks to the construction company, and became the Saudi Arabia-based agent for Kenworth.[12][13]

In the 1960s and 1970s, Khashoggi helped bring together Western companies and the Saudi Arabian Government to satisfy its infrastructure and defense needs.[12][13] Between 1970 and 1975, Lockheed paid Khashoggi $106 million in commissions. His commissions started at 2.5% and eventually rose to as much as 15%. Khashoggi "became for all practical purposes a marketing arm of Lockheed. Khashoggi would provide not only an entrée but strategy, constant advice, and analysis", according to Max Helzel, then vice president of Lockheed's international marketing.[14]

A commercial pioneer, he established companies in Switzerland and Liechtenstein to handle his commissions as well as developing contacts with notables such as CIA officers James H. Critchfield and Kim Roosevelt and United States businessman Bebe Rebozo, a close associate of U.S. President Richard Nixon. His yacht, the Nabila, was the largest in the world at the time and was used in the James Bond film Never Say Never Again.[12][13] After Khashoggi ran into financial problems he sold the yacht to the Sultan of Brunei, who in turn sold it for $29 million to Donald Trump, who sold it for $20 million[15] to Prince Al-Waleed bin Talal as part of a deal to keep his Taj Mahal casino out of bankruptcy. Khashoggi gained influence with important people by having large payments and women delivered to them around the world, including a large sum to U.S. President Richard Nixon.[16] Americans corporations, which at the time were prohibited by law from donating directly to political campaigns, used Khashoggi as a middle man to donate $200 million through a friendly bank to the 1972 political campaign of Richard Nixon.[17]

Khashoggi headed a company called Triad International Holding Company which among other things built the Triad Center in Salt Lake City, which later went bankrupt.[18] He was famed as an arms dealer, brokering deals between US firms and the Saudi government, most actively in the 1960s and 1970s. In the documentary series The Mayfair Set, Saudi author Said Aburish states that one of Khashoggi's first weapons deals was providing David Stirling with weapons for a covert mission in Yemen during the Aden Emergency in 1963. Among his overseas clients were defense contractors Lockheed Corporation (now Lockheed Martin Corporation), Raytheon, Grumman Aircraft Engineering Corporation and Northrop Corporation (the last two of which have now merged into Northrop Grumman).[13][3]

Triad International is a multi-national private investment corporation that was owned by Khashoggi. Its investments include many notable properties and businesses throughout the world. The company consisted of subsidiary companies, including Triad Management, Triad Properties, Triad Energy, Triad Technology, and Triad Financial resources.[4][13][19]

The Global span of the businesses prompted the creation by the Khashoggi family of a board-game called Triopoly which was modeled after the classic game of Monopoly. The various game tiles represented properties and companies owned by Khashoggi and his Triad corporation. The game was manufactured and given to family and friends.[citation needed]

Triad International was formed in the early 1960s and as it grew spanned five continents.[13] The company holdings included hotels, shopping centers, banks, oil refineries, a computer manufacturer, a gold mine, construction companies, car and truck franchises, and a professional sports team, the Utah Jazz.[4][13][19]

Khashoggi's custom board game of his properties

The company was headquartered in Geneva, Switzerland with its subsidiary companies located in the United States, Canada and Saudi Arabia.[citation needed]

Khashoggi also owned several private jets, and super-yachts through Triad, including a McDonnell Douglas DC-8 and DC-9, three Boeing 727s, and several smaller business jets and helicopters. His three super-yachts, the Nabila, the Mohammadia, and the Khalida, were named after his children, Nabila, Mohammed, and Khalid.[13]

Khashoggi was implicated in the Iran–Contra affair as a key middleman in the arms-for-hostages exchange along with Iranian arms dealer Manucher Ghorbanifar and, in a complex series of events, was found to have borrowed money for these arms purchases from the Bank of Credit and Commerce International (BCCI) with Saudi and United States backing.[3] His role in the affair created a related controversy when Khashoggi donated millions to the American University in Washington, DC to build a sports arena which would bear his name.[20] Khashoggi was a member of the university's board of trustees from 1983 until his indictment on fraud and other charges in May 1989.[21] Khashoggi was "principal foreign agent" of the United States and helped establish the supranational intelligence partnership known as the Safari Club.[22] 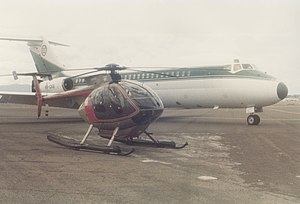 In 1988, Khashoggi was arrested in Switzerland, accused of concealing funds, and held for three months. Khashoggi stopped fighting extradition when the U.S. prosecutors reduced the charges to obstruction of justice and mail fraud and dropped the more serious charges of racketeering and conspiracy. In 1990, a United States federal jury in Manhattan acquitted Khashoggi and Imelda Marcos, widow of the exiled Philippine President Ferdinand Marcos, of racketeering and fraud.[23][24]

Appearing on After Dark in 1991

In 1991 Khashoggi made an extended appearance on the British television programme After Dark, alongside, among others, former Prime Minister Edward Heath and Lord Weidenfeld.[25]

Khashoggi also appeared in Lifestyles of the Rich and Famous in 1985 with host Robin Leach which showcased Khashoggi's extravagant lifestyle.

During his peak, Khashoggi was a well-known figure who frequently appeared in the press and media. He also appeared in various television shows, newspapers, and notable magazine covers such as Time (magazine) and The Washington Post.

Khashoggi was a financier behind Genesis Intermedia, Inc. (formerly NASDAQ: GENI), a publicly traded Internet company based in the US. In 2006, Khashoggi was sued by the U.S. Securities and Exchange Commission for securities fraud.[26] The case was dismissed in 2008 and Khashoggi did not admit or deny the allegations.[27]

In January 2003, Seymour Hersh reported in The New Yorker magazine that former U.S. Assistant Secretary of Defense Richard Perle had a meeting with Khashoggi in Marseille in order to use him as a conduit between Trireme Partners, a private venture capital company of which he was one of three principals, and the Saudi government.[28] At the time, Perle was chair of the Defense Policy Board Advisory Committee, a Defense Department advisory group, which provided him with access to classified information and a position to influence defense policy.[28]

Khashoggi told Hersh that Perle talked to him about the economic costs regarding a proposed invasion of Iraq. "'If there is no war,' he told me, 'why is there a need for security? If there is a war, of course, billions of dollars will have to be spent.'"[29]

In the 1960s, Khashoggi married 20-year-old Englishwoman Sandra Daly (m. 1961–1974) who converted to Islam and took the name Soraya Khashoggi. They raised one daughter (Nabila)[30] and four sons together (Mohamed, Khalid, Hussein, and Omar).[11]

In 1999, DNA testing confirmed that Petrina Khashoggi, (b. Dec 1979), was born five years (previously stated as seven) after Kashoggi's divorce from Soraya but who was raised with his surname, was actually the biological child of Jonathan Aitken, an Irish-born British former Conservative Member of Parliament in the United Kingdom (1974–97), and a former Cabinet minister.[13][31]

Adnan Khashoggi's second wife, the Italian Laura Biancolini, (m. 1978) also converted to Islam and changed her name to Lamia Khashoggi. She was seventeen when she met Adnan; together they had a son, Ali.[11]

In the 1980s, the Khashoggi family occupied one of the largest villa estates in Marbella, Spain, called Baraka, hosting lavish parties.[citation needed] Guests at these parties included film stars, pop celebrities and politicians.[32] In 1985, celebrity reporter Robin Leach reported Khashoggi threw a five-day birthday party in Vienna for his eldest son,[33] and in his heyday, Khashoggi spent $250,000 a day to maintain his lifestyle.[34] He continued to spend lavishly even when he encountered financial problems.[11] His net worth was said to have been down to about 8 million in 1990.[35] Due to his extravagant lifestyle, he was called the Great Gatsby of the Middle East.[36]

Khashoggi also owned Ol Pejeta Conservancy, in Laikipia County, Kenya known at the time as the Mount Kenya Safari Club. His house has since been converted into a hotel which is run by Serena Hotels.[19]