An administrative court is a type of court specializing in administrative law, particularly disputes concerning the exercise of public power. Their role is to ascertain that official acts are consistent with the law. Such courts are considered separate from general courts.

The administrative acts are recognized from the hallmark that they become binding without the consent of the other involved parties. The contracts between authorities and private persons fall usually to the jurisdiction of the general court system. Official decisions contested in administrative courts include:[1] 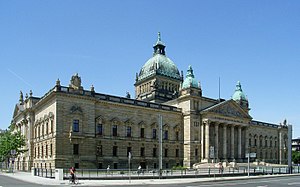 The parallel system is found in countries like Egypt, Greece, Germany, France, Italy, some of the Nordic Countries, Portugal, Taiwan and others. In France, Greece, Portugal and Sweden, the system has three levels like the general system, with local courts, appeals courts and a Supreme Administrative Court. In Finland, Italy, Poland and Taiwan, the system has two levels, where the court of first instance is a regional court. In Germany, the system is more complicated, and courts are more specialized.

The Conseil d'Etat in Paris is the Supreme Administrative court in France .

Notably, in 1952, the Communist East German government abolished the administrative courts as "bourgeois". This limited the citizens' ability to contest official decisions. In 1989, re-establishment of the system began in DDR, but the German reunification made this initiative obsolete.