Chinese acrobat in midair after being propelled off a teeterboard, China, 1987

Acrobatics (from Ancient Greek ἀκροβατέω, akrobateo, "walk on tiptoe, strut"[1]) is the performance of extraordinary human feats of balance, agility, and motor coordination. It can be found in many of the performing arts, sporting events, and martial arts. Acrobatics is most often associated with activities that make extensive use of gymnastic elements, such as acro dance, circus, and gymnastics, but many other athletic activities—such as ballet, slacklining and diving—may also employ acrobatics. Although acrobatics is most commonly associated with human body performance, it may also apply to other types of performance, such as aerobatics. 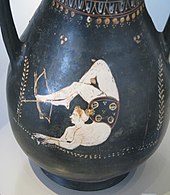 Female acrobat shooting an arrow with a bow in her feet; Gnathia style pelikai pottery; 4th century BC

Acrobatic traditions are found in many cultures, and there is evidence that the earliest such traditions occurred thousands of years ago. For example, Minoan art from c. 2000 BC contains depictions of acrobatic feats on the backs of bulls. Ancient Greeks practiced acrobatics,[2] and the noble court displays of the European Middle Ages would often include acrobatic performances that included juggling[citation needed].

Though the term initially applied to tightrope walking,[citation needed] in the 19th century, a form of performance art including circus acts began to use the term as well. In the late 19th century, tumbling and other acrobatic and gymnastic activities became competitive sport in Europe.

Acrobatics has often served as a subject for fine art. Examples of this are paintings such as Acrobats at the Cirque Fernando (Francisca and Angelina Wartenberg) by Impressionist Pierre-Auguste Renoir, which depicts two German acrobatic sisters, Pablo Picasso's 1905 Acrobat and Young Harlequin, and Acrobats in a Paris suburb by Viktor Vasnetsov.

An aerialist is an acrobat who performs in the air, on a suspended apparatus such as a trapeze, rope, cloud swing, aerial cradle, aerial pole, aerial silk, or aerial hoop.[5]