Acoustic location is the use of sound to determine the distance and direction of its source or reflector. Location can be done actively or passively, and can take place in gases (such as the atmosphere), liquids (such as water), and in solids (such as in the earth).

Both of these techniques, when used in water, are known as sonar; passive sonar and active sonar are both widely used.

As a military air defense tool, passive acoustic location was used from mid-World War I[1] to the early years of World War II to detect enemy aircraft by picking up the noise of their engines. It was rendered obsolete before and during World War II by the introduction of radar, which was far more effective (but interceptable). Acoustic techniques had the advantage that they could 'see' around corners and over hills, due to sound diffraction.

The civilian uses include locating wildlife[2] and locating the shooting position of a firearm.[3]

Acoustic source localization[4] is the task of locating a sound source given measurements of the sound field. The sound field can be described using physical quantities like sound pressure and particle velocity. By measuring these properties it is (indirectly) possible to obtain a source direction.

Some have termed acoustic source localization an "inverse problem" in that the measured sound field is translated to the position of the sound source.

Different methods for obtaining either source direction or source location are possible.

The traditional method to obtain the source direction is using the time difference of arrival (TDOA) method. This method can be used with pressure microphones as well as with particle velocity probes.

where <math>c</math> is the speed of sound in the medium surrounding the sensors and the source.

In trigonometry and geometry, triangulation is the process of determining the location of a point by measuring angles to it from known points at either end of a fixed baseline, rather than measuring distances to the point directly (trilateration). The point can then be fixed as the third point of a triangle with one known side and two known angles.

For acoustic localization this means that if the source direction is measured at two or more locations in space, it is possible to triangulate its location.

Steered Response Power (SRP) methods are a class of indirect acoustic source localization methods. Instead of estimating a set of time-differences of arrival (TDOAs) between pairs of microphones and combining the acquired estimates to find the source location, indirect methods search for a candidate source location over a grid of spatial points. In this context, methods such as the Steered-Response Power Phase Transform (SRP-PHAT)[5] are usually interpreted as finding the candidate location that maximizes the output of a delay-and-sum beamformer. The method has been shown to be very robust to noise and reverberation, motivating the development of modified approaches aimed at increasing its performance in real-time acoustic processing applications.[6] 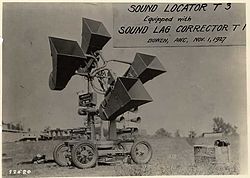 Military uses have included locating submarines[7] and aircraft.[8] The first use of this type of equipment was claimed by Commander Alfred Rawlinson of the Royal Naval Volunteer Reserve, who in the autumn of 1916 was commanding a mobile anti-aircraft battery on the east coast of England. He needed a means of locating Zeppelins during cloudy conditions and improvised an apparatus from a pair of gramophone horns mounted on a rotating pole. Several of these equipments were able to give a fairly accurate fix on the approaching airships, allowing the guns to be directed at them despite being out of sight.[9] Although no hits were obtained by this method, Rawlinson claimed to have forced a Zeppelin to jettison its bombs on one occasion.[10]

The air-defense instruments usually consisted of large horns or microphones connected to the operators' ears using tubing, much like a very large stethoscope.[11][12] 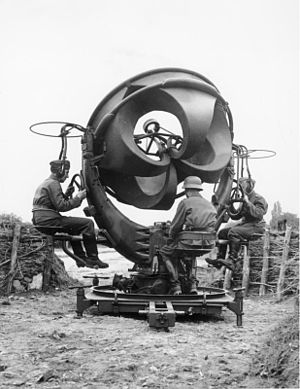 Sound location equipment in Germany, 1939. It consists of four acoustic horns, a horizontal pair and a vertical pair, connected by rubber tubes to stethoscope type earphones worn by the two technicians left and right. The stereo earphones enabled one technician to determine the direction and the other the elevation of the aircraft.

Most of the work on anti-aircraft sound ranging was done by the British. They developed an extensive network of sound mirrors that were used from World War I through World War II.[13][14] Sound mirrors normally work by using moveable microphones to find the angle that maximizes the amplitude of sound received, which is also the bearing angle to the target. Two sound mirrors at different positions will generate two different bearings, which allows the use of triangulation to determine a sound source's position.

As World War II neared, radar began to become a credible alternative to the sound location of aircraft. For typical aircraft speeds of that time, sound location only gave a few minutes of warning.[8] The acoustic location stations were left in operation as a backup to radar, as exemplified during the Battle of Britain.[15] Today, the abandoned sites are still in existence and are readily accessible.[13][dead link]

Active locators have some sort of signal generation device, in addition to a listening device. The two devices do not have to be located together.

SONAR or sonar (sound navigation and ranging) is a technique that uses sound propagation under water (or occasionally in air) to navigate, communicate or to detect other vessels. There are two kinds of sonar – active and passive. A single active sonar can localize in range and bearing as well as measuring radial speed. However, a single passive sonar can only localize in bearing directly, though Target Motion Analysis can be used to localize in range, given time. Multiple passive sonars can be used for range localization by triangulation or correlation, directly.

Dolphins, whales and bats use echolocation to detect prey and avoid obstacles.

Having speakers/ultrasonic transmitters emitting sound at known positions and time, the position of a target equipped with a microphone/ultrasonic receiver can be estimated based on the time of arrival of the sound. The accuracy is usually poor under non-line-of-sight conditions, where there are blockages in between the transmitters and the receivers. [16] 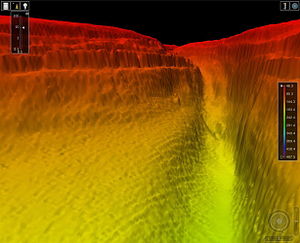 Seismic surveys involve the generation of sound waves to measure underground structures. Source waves are generally created by percussion mechanisms located near the ground or water surface, typically dropped weights, vibroseis trucks, or explosives. Data are collected with geophones, then stored and processed by computer. Current technology allows the generation of 3D images of underground rock structures using such equipment.

Because the cost of the associated sensors and electronics is dropping, the use of sound ranging technology is becoming accessible for other uses, such as for locating wildlife.[17]