Aconcagua (Spanish pronunciation: [akoŋˈkaɣwa]) is a mountain in the Principal Cordillera[3] of the Andes mountain range, in Mendoza Province, Argentina. It is the highest mountain in the Americas, the highest outside Asia,[4] and the highest in both the Southern and the Western Hemispheres[1] with a summit elevation of 6,961 metres (22,838 ft). It lies 112 kilometres (70 miles) northwest of the provincial capital, the city of Mendoza, about five kilometres (three miles) from San Juan Province, and 15 km (9 mi) from Argentina's border with neighbouring Chile.[5] The mountain is one of the so-called Seven Summits of the seven continents.

Aconcagua is bounded by the Valle de las Vacas to the north and east and the Valle de los Horcones Inferior to the west and south. The mountain and its surroundings are part of the Aconcagua Provincial Park. The mountain has a number of glaciers. The largest glacier is the Ventisquero Horcones Inferior at about 10 km (6 mi) long, which descends from the south face to about 3,600 m (11,800 ft) in altitude near the Confluencia camp.[6] Two other large glacier systems are the Ventisquero de las Vacas Sur and Glaciar Este/Ventisquero Relinchos system at about 5 km (3 mi) long. The most well known is the north-eastern or Polish Glacier, as it is a common route of ascent.

The mountain was created by the subduction of the Nazca Plate beneath the South American Plate. Aconcagua used to be an active stratovolcano (from the Late Cretaceous or Early Paleocene through the Miocene) and consisted of several volcanic complexes on the edge of a basin with a shallow sea. However, sometime in the Miocene, about 8 to 10 million years ago, the subduction angle started to decrease, resulting in a stop of the melting and more horizontal stresses between the oceanic plate and the continent, causing the thrust faults that lifted Aconcagua up off its volcanic root. The rocks found on Aconcagua's flanks are all volcanic and consist of lavas, breccias and pyroclastics. The shallow marine basin had already formed earlier (Triassic), even before Aconcagua arose as a volcano. However, volcanism has been present in this region for as long as this basin was around and volcanic deposits interfinger with marine deposits throughout the sequence. The colorful greenish, blueish and grey deposits that can be seen in the Horcones Valley and south of Puente Del Inca, are carbonates, limestones, turbidites and evaporates that filled this basin. The red colored rocks are intrusions, cinder deposits and conglomerates of volcanic origin.[9] 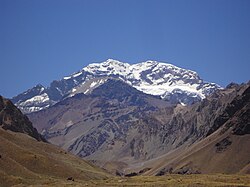 In mountaineering terms, Aconcagua is technically an easy mountain if approached from the north, via the normal route. Aconcagua is arguably the highest non-technical mountain in the world, since the northern route does not absolutely require ropes, axes, and pins[clarification needed]. Although the effects of altitude are severe (atmospheric pressure is 40% of sea-level at the summit), the use of supplemental oxygen is not common. Altitude sickness will affect most climbers to some extent, depending on the degree of acclimatization.[10] Although the normal climb is technically easy, multiple casualties occur every year on this mountain (in January 2009 alone five climbers died).[11] This is due to the large numbers of climbers who make the attempt and because many climbers underestimate the objective risks of the elevation and of cold weather, which is the real challenge on this mountain. Given the weather conditions close to the summit, cold weather injuries are very common. 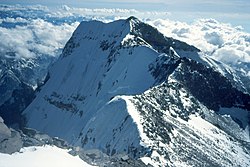 The routes to the peak from the south and south-west ridges are more demanding and the south face climb is considered quite difficult. The Polish Glacier Traverse route, also known as the "Falso de los Polacos" route, crosses through the Vacas valley, ascends to the base of the Polish Glacier, then traverses across to the normal route for the final ascent to the summit. The third most popular route is by the Polish Glacier itself.

Provincial Park rangers do not maintain records of successful summits but estimates suggest a summit rate of 30–40%.[citation needed] About 75% of climbers are foreigners and 25% are Argentinean. Among foreigners, the United States leads in number of climbers, followed by Germany and the UK. About 54% of climbers ascend the Normal Route, 43% up the Polish Glacier Route, and the remaining 3% on other routes.[12]

The camp sites on the normal route are listed below (altitudes are approximate).

Summit attempts are usually made from a high camp at either Berlín or Colera, or from the lower camp at Nido de Cóndores.

Normal route to the summit 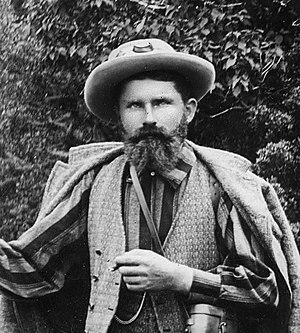 Matthias Zurbriggen reached the summit in 1897.

The first attempt to summit Aconcagua by Europeans was made in 1883 by a party led by the German geologist and explorer Paul Güssfeldt. Bribing porters with the story of treasure on the mountain, he approached the mountain via the Rio Volcan, making two attempts on the peak by the north-west ridge and reaching an altitude of 6,500 metres (21,300 ft). The route that he prospected is now the standard route up the mountain.

The east side of Aconcagua was first scaled by a Polish expedition, with Konstanty Narkiewicz-Jodko, Stefan Daszyński, Wiktor Ostrowski and Stefan Osiecki summiting on 9 March 1934, over what is now known as the Polish Glacier. A route over the Southwest Ridge was pioneered over seven days in January 1953 by the Swiss-Argentine team of Frederico and Dorly Marmillod, Francisco Ibanez and Fernando Grajales. The famously difficult South Face was conquered by a French team led by René Ferlet [fr]. Pierre Lesueur, Adrien Dagory, Robert Paragot, Edmond Denis, Lucien Berardini and Guy Poulet reached the summit after a month of effort on 25 February 1954.[16][17]

In the base camp Plaza de Mulas (at 4,300 m (14,100 ft) above sea level) there is the highest contemporary art gallery tent called "Nautilus" of the Argentine painter Miguel Doura.[21]

In 2014 Kilian Jornet set a record for climbing and descending Aconcagua from Horcones in 12 hours and 49 minutes.[22] The record was broken less than two months later by Ecuadorian-Swiss Karl Egloff, in a time of 11 hours 52 minutes, nearly an hour faster than Kilian Jornet.[23]

On 25 September 2019, an Airbus Helicopters H145 landed on the very peak of Mount Aconcagua. This is the first time in history a twin-engine helicopter has landed at this altitude. It took a total of 45 minutes for the entire trip, 30 minutes from Mendoza, Argentina and another 15 from the base camp up to the peak. Temperatures were reported as low as −22° and wind gusts up to 30 knots. This is not the highest a helicopter has landed before, as an Airbus Helicopters H125 has landed on Mount Everest, the highest mountain in the world.[24]

The mountain has a cameo in a 1942 Disney cartoon called Pedro, which features a small, anthropomorphic airplane named Pedro who has a near-disastrous encounter with Aconcagua while carrying mail over the Andes.

At nearly 7,000 m (23,000 ft),[25] Aconcagua is the highest peak outside of Asia.[26] It is believed to have the highest death rate of any mountain in South America – around three a year – which has earned it the nickname "Mountain of Death". More than 100 people have died on Aconcagua since records began.[27]

Due to the improper disposal of human waste in the mountain environment there are significant health hazards[25] that pose a threat to both animals and human beings.[28] Only boiled or chemically treated water is accepted for drinking. Additionally, ecofriendly toilets are available only to members of an organised expedition, meaning climbers have to "be contracted to a toilet service" at the base camp and similar camps along the route. Currently, from two base camps (Plaza de Mulas and Plaza Argentina), over 120 barrels of waste (approx. 22,500 kg (49,600 lb)) are flown out by helicopter each season.[29] In addition, individual mountaineers must make a payment before using these toilets. Some large organisers will give a price up to US$100, some smaller US$5/day or US$10 for the entire stay. Thus, many independent mountaineers defecate on the mountainside.[25]

For the Incas, the Aconcagua was a sacred mountain. As on other mountains (e.g. Ampato), places of worship were built here and sacrifices, including human sacrifices, were made. The sites discovered in 1985 at an altitude of 5167 m are among the highest in the world and are the most difficult of all Inca sites to reach. Here, the remains of a child bedded on grass, cloth and feathers were found inside stone walls (Aconcagua mummy). The clothing indicates that the child was a member of the highest social class. Other offerings found included figures and coca leaves.[citation needed]