Many extracellular proteins such as the plasma proteins and membrane proteins of the body's cells are very sensitive for their three dimensional structures to the extracellular pH.[3][4] Stringent mechanisms therefore exist to maintain the pH within very narrow limits. Outside the acceptable range of pH, proteins are denatured (i.e. their 3-D structure is disrupted), causing enzymes and ion channels (among others) to malfunction.

In humans and many other animals, acid–base homeostasis is maintained by multiple mechanisms involved in three lines of defence:[5][6]

Physiological corrective measures make up the second and third lines of defence. This is because they operate by making changes to the buffers, each of which consists of two components: a weak acid and its conjugate base.[5][12] It is the ratio concentration of the weak acid to its conjugate base that determines the pH of the solution.[13] Thus, by manipulating firstly the concentration of the weak acid, and secondly that of its conjugate base, the pH of the extracellular fluid (ECF) can be adjusted very accurately to the correct value. The bicarbonate buffer, consisting of a mixture of carbonic acid (H2CO3) and a bicarbonate (HCO−
3) salt in solution, is the most abundant buffer in the extracellular fluid, and it is also the buffer whose acid to base ratio can be changed very easily and rapidly.[14]

Aqueous buffer solutions will react with strong acids or strong bases by absorbing excess hydrogen H+
ions, or hydroxide OH−
ions, replacing the strong acids and bases with weak acids and weak bases.[12] This has the effect of damping the effect of pH changes, or reducing the pH change that would otherwise have occurred. But buffers cannot correct abnormal pH levels in a solution, be that solution in a test tube or in the extracellular fluid. Buffers typically consist of a pair of compounds in solution, one of which is a weak acid and the other a weak base.[12] The most abundant buffer in the ECF consists of a solution of carbonic acid (H2CO3), and the bicarbonate (HCO−
3) salt of, usually, sodium (Na+).[5] Thus, when there is an excess of OH−
ions in the solution carbonic acid partially neutralizes them by forming H2O and bicarbonate (HCO−
3) ions.[5][14] Similarly an excess of H+ ions is partially neutralized by the bicarbonate component of the buffer solution to form carbonic acid (H2CO3), which, because it is a weak acid, remains largely in the undissociated form, releasing far fewer H+ ions into the solution than the original strong acid would have done.[5]

This principle is exploited to regulate the pH of the extracellular fluids (rather than just buffering the pH). For the carbonic acid-bicarbonate buffer, a molar ratio of weak acid to weak base of 1:20 produces a pH of 7.4; and vice versa - when the pH of the extracellular fluids is 7.4 then the ratio of carbonic acid to bicarbonate ions in that fluid is 1:20.[13]

This relationship is described mathematically by the Henderson–Hasselbalch equation, which, when applied to the carbonic acid-bicarbonate buffer system in the extracellular fluids, states that:[13]

However, since the carbonic acid concentration is directly proportional to the partial pressure of carbon dioxide (<math>P_{{\mathrm{CO}}_2}</math>) in the extracellular fluid, the equation can be rewritten as follows:[5][13]

There are therefore at least two homeostatic negative feedback systems responsible for the regulation of the plasma pH. The first is the homeostatic control of the blood partial pressure of carbon dioxide, which determines the carbonic acid concentration in the plasma, and can change the pH of the arterial plasma within a few seconds.[5] The partial pressure of carbon dioxide in the arterial blood is monitored by the central chemoreceptors of the medulla oblongata, and so are part of the central nervous system.[5][19] These chemoreceptors are sensitive to the pH and levels of carbon dioxide in the cerebrospinal fluid.[13][11][19] (The peripheral chemoreceptors are located in the aortic bodies and carotid bodies adjacent to the arch of the aorta and to the bifurcation of the carotid arteries, respectively.[19] These chemoreceptors are sensitive primarily to changes in the partial pressure of oxygen in the arterial blood and are therefore not directly involved with pH homeostasis.[19])

The sensor for the plasma HCO−
3 concentration is not known for certain. It is very probable that the renal tubular cells of the distal convoluted tubules are themselves sensitive to the pH of the plasma. The metabolism of these cells produces CO2, which is rapidly converted to H+ and HCO−
3 through the action of carbonic anhydrase.[5][9][10] When the extracellular fluids tend towards acidity, the renal tubular cells secrete the H+ ions into the tubular fluid from where they exit the body via the urine. The HCO−
3 ions are simultaneously secreted into the blood plasma, thus raising the bicarbonate ion concentration in the plasma, lowering the carbonic acid/bicarbonate ion ratio, and consequently raising the pH of the plasma.[5][11] The converse happens when the plasma pH rises above normal: bicarbonate ions are excreted into the urine, and hydrogen ions into the plasma. These combine with the bicarbonate ions in the plasma to form carbonic acid (H+ + HCO−
3 = H2CO3), thus raising the carbonic acid:bicarbonate ratio in the extracellular fluids, and returning its pH to normal.[5]

In general, metabolism produces more waste acids than bases.[5] The urine is therefore generally acid. This urinary acidity is, to a certain extent, neutralized by the ammonia (NH3) which is excreted into the urine when glutamate and glutamine (carriers of excess, no longer needed, amino groups) are deaminated by the distal renal tubular epithelial cells.[5][10] Thus some of the "acid content" of the urine resides in the resulting ammonium ion (NH4+) content of the urine, though this has no effect on pH homeostasis of the extracellular fluids.[5][21] 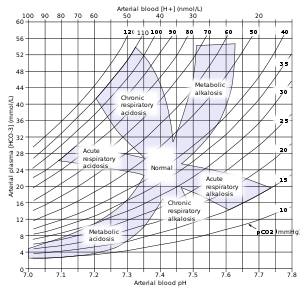 An acid base nomogram for human plasma, showing the effects on the plasma pH when carbonic acid (partial pressure of carbondioxide) or bicarbonate occur in excess or are deficient in the plasma

Acid–base imbalance occurs when a significant insult causes the blood pH to shift out of the normal range (7.32 to 7.42[15]). An abnormally low pH in the ECF is called an acidaemia and an abnormally high pH is called an alkalaemia.

A second pair of terms is used in acid-base pathophysiology: "acidosis" and "alkalosis". They are often used as synonyms for "acidaemia" and "alkalaemia",[22] though this can cause confusion. "Acidaemia" refers unambiguously to the actual change in the pH of the ECF, whereas "acidosis", strictly speaking, refers to either a rise in the amount of carbonic acid in the ECF or to a decrease in the amount of HCO−
3 in the ECF. Either change would on its own (i.e. if left "uncompensated" by an alkalosis) cause an acidaemia.[22] Similarly an alkalosis refers to a rise in the concentration of bicarbonate in the ECF, or to a fall on the partial pressure of carbon dioxide, either of which would on their own raise the pH of the ECF above the normal value.[22] The terms acidosis and alkalosis should always be qualified by an adjective to indicate the cause of the disturbance: "respiratory" (indicating a change in the partial pressure of carbon dioxide),[23] or "metabolic" (indicating a change in the bicarbonate concentration of the ECF).[5][24] There are therefore four different acid-base problems: metabolic acidosis, respiratory acidosis, metabolic alkalosis, and respiratory alkalosis.[5] One or a combination these conditions may occur simultaneously. For instance, a metabolic acidosis (as in uncontrolled diabetes mellitus) is almost always partially compensated by a respiratory alkalosis (hyperventilation), or a respiratory acidosis can be completely or partially corrected by a metabolic alkalosis.