Page Discussion
File:Offshoreworks.jpg
Large accropode units are lowered into a position offshore by aid of a crane.

Accropode blocks are man-made unreinforced concrete objects designed to resist the action of waves on breakwaters and coastal structures.

The Accropode is a single-layer artificial armour unit developed by Sogreah in 1981. Accropode concrete armour units are applied in a single layer. 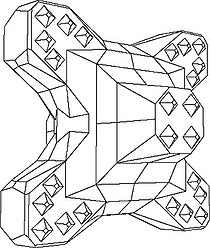 In 1999, Sogreah modified the original Accropode shape by chipping away excess materials and adding friction features in the form of small pyramids. A patent application was filed for this modified shape. In 2004 further modifications to the 1999 shape were made, resulting in the Accropode II. The shape modifications are intended to increase interlocking.

These coefficients are valid for armour slopes from 3H/2V to 4H/3V and for seabed slopes up to 3%. 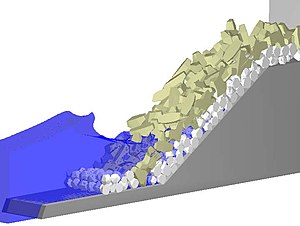 3D simulation of wave motion near an accropodes.[1]

Fork-lifting is effective for handling the small to medium size units, whereas large units are handled by sling. Placement for breakwaters generally requires a crane or a barge-mounted crane.

The units can be stored one on top of the other, and placed in a random attitude to obtain the specified packing density. The proper packing method provides an adequate coverage on breakwater slopes.

The use of a remote-release hook is used for placing the unit, while underwater placements may be enhanced by GPS, adhering to a theoretical grid.