Accidental Death of an Anarchist

Accidental Death of an Anarchist (Italian: Morte accidentale di un anarchico) is a play by Italian playwright Dario Fo that premiered in 1970. Considered a classic of 20th-century theater, it has been performed across the world in more than forty countries. The play is based on the 1969 Piazza Fontana bombing.[1] 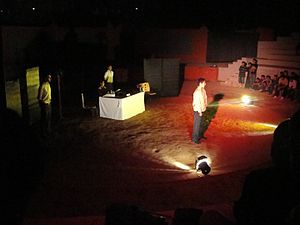 The play opens with Inspector Francesco Bertozzo interrogating a clever, quick-witted and mischievous fraudster, simply known as the Maniac, in Bertozzo's office on the third floor of the police headquarters in Milan. The Maniac constantly outsmarts the dim-witted Bertozzo and, when Bertozzo leaves the room, intercepts a phone call from Inspector Pissani. Pissani reveals to the Maniac that a judge is due at the police station to investigate the interrogation and "accidental" death of the anarchist, whilst the Maniac pretends to be a colleague of Bertozzo's and telling Pissani that Bertozzo is "blowing a raspberry" at him. The Maniac decides to impersonate the judge, Marco Malipiero, an opportunity he has been waiting a while for, and to humiliate the policemen responsible for the "accidental" death. After Bertozzo reenters his office, the Maniac is forced out of the office, taking Bertozzo's coat and hat to use in his disguise. Bertozzo chases him, running into Pissani, who punches him in retaliation for "blowing a raspberry" at him.

As the presence of Judge Malipiero would endanger them, the policemen tell the Maniac to leave for the time being. Instead, the Maniac intends to disguise himself as a forensic expert from Rome, Captain Piccini. The Maniac leaves the office. Feletti nearly exposes the three policemen, until the Maniac reenters, as an extravagantly-dressed amputee. The Maniac manages to concoct a story on how the anarchist died: one of the impatient policemen hit the anarchist in the neck, an ambulance being called; the anarchist then being led to the window for fresh air, and pushed accidentally out of the window due to uncoordinated balance between the two policemen leading him to the window. Feletti is unconvinced, noting how the death of the anarchist was reported by the police to be a suicide, opposed to their original comment that it was "accidental". Bertozzo suddenly enters, delivering a replica of a bomb from another anarchist attack. Bertozzo partially recognises the Maniac, as he knows Captain Piccini, but is dissuaded by Pissani and the Superintendent. Feletti begins to pick out the inconsistencies in the policemen's stories, and showing that anarchists in Milan are mainly fascists, not actual revolutionaries.

Bertozzo realises that "Piccini" is the Maniac, after seeing his coat and hat on a stand. Bertozzo, holding the policemen at gunpoint, orders Feletti to cuff the three policemen; getting the Maniac to show them his medical records, exposing him as a fraud. The Maniac reveals a tape recorder, which he used to record Pissani and the Superintendent's tirade, exposing their crime. The Maniac strips off his disguise, making him recognizable to Feletti, who identifies him as Paulo Davidovitch Gandolpho, the "Prose Pimpernel of the Permanent Revolution" and "notorious sports editor of Lotta Continua". Revealing that the bomb replica can in fact work, setting it off on a timer, the Maniac has Bertozzo join his fellow policemen. Feletti attempts to stop the Maniac, citing the Maniac as an "extremist" and "fanatic". The Maniac, instead of killing her, offers her an ultimatum: save the four corrupt policemen, acquitting them and the Maniac will be put behind bars; or leave them to die for their crime and unwittingly join the extremist movement as an accomplice. The Maniac then leaves to spread the recording.

The Maniac then addresses the audience, showing what the scenario entails. When Feletti leaves them, the four policemen die in the resulting explosion. However, the Maniac then offers the second result: sticking to the rule of law, Feletti releases them, but is chained to the window by the policemen when they realize that Feletti knows what they did. The Maniac then leaves the audience to decide which ending they prefer.

A Hindi adaptation of the play, Bechara Mara Gaya,[2] was made into a film.[3] Another earlier adaptation, Dhool Me Lipta Sach, ran in Pune.[4]

Ed Emery was the translator for an authorised English-language version of the play.[5] A TV movie of the play, starring Gavin Richards as "The Maniac", was commissioned by Channel 4 in 1983.[6][7]

A sequel, Pum pum! Chi è? La polizia! (Knock Knock! Who's There? The Police!), was written in 1974.[8] Semiotician Umberto Eco commented favourably on the sequel in his column in the newspaper L'Espresso.[9]