A sailor checks an identification card (ID) before allowing a vehicle to enter a military institution.

In the fields of physical security and information security, access control (AC) is the selective restriction of access to a place or other resource[1] while access management describes the process. The act of accessing may mean consuming, entering, or using. Permission to access a resource is called authorization. 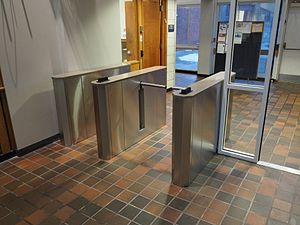 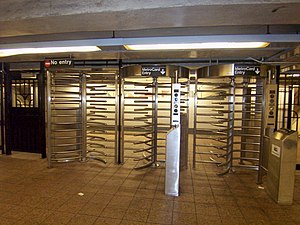 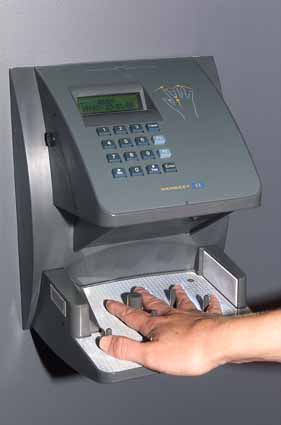 Example of fob based access control using an ACT reader

Geographical access control may be enforced by personnel (e.g., border guard, bouncer, ticket checker), or with a device such as a turnstile. There may be fences to avoid circumventing this access control. An alternative of access control in the strict sense (physically controlling access itself) is a system of checking authorized presence, see e.g. Ticket controller (transportation). A variant is exit control, e.g. of a shop (checkout) or a country.[2]

The term access control refers to the practice of restricting entrance to a property, a building, or a room to authorized persons. Physical access control can be achieved by a human (a guard, bouncer, or receptionist), through mechanical means such as locks and keys, or through technological means such as access control systems like the mantrap. Within these environments, physical key management may also be employed as a means of further managing and monitoring access to mechanically keyed areas or access to certain small assets.[2]

Physical access control is a matter of who, where, and when. An access control system determines who is allowed to enter or exit, where they are allowed to exit or enter, and when they are allowed to enter or exit. Historically, this was partially accomplished through keys and locks. When a door is locked, only someone with a key can enter through the door, depending on how the lock is configured. Mechanical locks and keys do not allow restriction of the key holder to specific times or dates. Mechanical locks and keys do not provide records of the key used on any specific door, and the keys can be easily copied or transferred to an unauthorized person. When a mechanical key is lost or the key holder is no longer authorized to use the protected area, the locks must be re-keyed.[3]

Electronic access control (EAC) uses computers to solve the limitations of mechanical locks and keys. A wide range of credentials can be used to replace mechanical keys. The electronic access control system grants access based on the credential presented. When access is granted, the door is unlocked for a predetermined time and the transaction is recorded. When access is refused, the door remains locked and the attempted access is recorded. The system will also monitor the door and alarm if the door is forced open or held open too long after being unlocked.[2]

The above description illustrates a single factor transaction. Credentials can be passed around, thus subverting the access control list. For example, Alice has access rights to the server room, but Bob does not. Alice either gives Bob her credential, or Bob takes it; he now has access to the server room. To prevent this, two-factor authentication can be used. In a two factor transaction, the presented credential and a second factor are needed for access to be granted; another factor can be a PIN, a second credential, operator intervention, or a biometric input.[4]

There are three types (factors) of authenticating information:[5]

Passwords are a common means of verifying a user's identity before access is given to information systems. In addition, a fourth factor of authentication is now recognized: someone you know, whereby another person who knows you can provide a human element of authentication in situations where systems have been set up to allow for such scenarios. For example, a user may have their password, but have forgotten their smart card. In such a scenario, if the user is known to designated cohorts, the cohorts may provide their smart card and password, in combination with the extant factor of the user in question, and thus provide two factors for the user with the missing credential, giving three factors overall to allow access.[citation needed]

A credential is a physical/tangible object, a piece of knowledge, or a facet of a person's physical being that enables an individual access to a given physical facility or computer-based information system. Typically, credentials can be something a person knows (such as a number or PIN), something they have (such as an access badge), something they are (such as a biometric feature), something they do (measurable behavioural patterns) or some combination of these items. This is known as multi-factor authentication. The typical credential is an access card or key-fob, and newer software can also turn users' smartphones into access devices.[6] 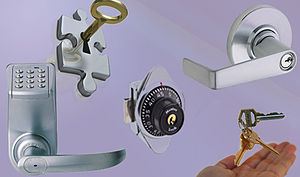 Access control decisions are made by comparing the credentials to an access control list. This look-up can be done by a host or server, by an access control panel, or by a reader. The development of access control systems has observed a steady push of the look-up out from a central host to the edge of the system, or the reader. The predominant topology circa 2009 is hub and spoke with a control panel as the hub, and the readers as the spokes. The look-up and control functions are by the control panel. The spokes communicate through a serial connection; usually RS-485. Some manufactures are pushing the decision making to the edge by placing a controller at the door. The controllers are IP enabled, and connect to a host and database using standard networks[12]

Access control readers may be classified by the functions they are able to perform:[13]

Some readers may have additional features such as an LCD and function buttons for data collection purposes (i.e. clock-in/clock-out events for attendance reports), camera/speaker/microphone for intercom, and smart card read/write support.[citation needed]

4. Serial controllers with terminal servers. In spite of the rapid development and increasing use of computer networks, access control manufacturers remained conservative, and did not rush to introduce network-enabled products. When pressed for solutions with network connectivity, many chose the option requiring less efforts: addition of a terminal server, a device that converts serial data for transmission via LAN or WAN.

5. Network-enabled main controllers. The topology is nearly the same as described in the second and third paragraphs. The same advantages and disadvantages apply, but the on-board network interface offers a couple of valuable improvements. Transmission of configuration and user data to the main controllers is faster, and may be done in parallel. This makes the system more responsive, and does not interrupt normal operations. No special hardware is required in order to achieve redundant host PC setup: in the case that the primary host PC fails, the secondary host PC may start polling network controllers. The disadvantages introduced by terminal servers (listed in the fourth paragraph) are also eliminated.

6. IP controllers. Controllers are connected to a host PC via Ethernet LAN or WAN.

7. IP readers. Readers are connected to a host PC via Ethernet LAN or WAN.

The advantages and disadvantages of IP controllers apply to the IP readers as well. 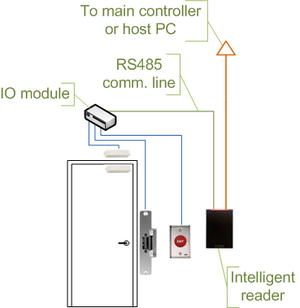 The most common security risk of intrusion through an access control system is by simply following a legitimate user through a door, and this is referred to as tailgating. Often the legitimate user will hold the door for the intruder. This risk can be minimized through security awareness training of the user population or more active means such as turnstiles. In very high-security applications this risk is minimized by using a sally port, sometimes called a security vestibule or mantrap, where operator intervention is required presumably to assure valid identification.[citation needed]

The third most common security risk is natural disasters. In order to mitigate risk from natural disasters, the structure of the building, down to the quality of the network and computer equipment vital. From an organizational perspective, the leadership will need to adopt and implement an All Hazards Plan, or Incident Response Plan. The highlights of any incident plan determined by the National Incident Management System must include Pre-incident planning, during incident actions, disaster recovery, and after-action review.[14]

Similar to levering is crashing through cheap partition walls. In shared tenant spaces, the divisional wall is a vulnerability. A vulnerability along the same lines is the breaking of sidelights.[citation needed]

Spoofing locking hardware is fairly simple and more elegant than levering. A strong magnet can operate the solenoid controlling bolts in electric locking hardware. Motor locks, more prevalent in Europe than in the US, are also susceptible to this attack using a doughnut-shaped magnet. It is also possible to manipulate the power to the lock either by removing or adding current, although most Access Control systems incorporate battery back-up systems and the locks are almost always located on the secure side of the door.[citation needed]

Access cards themselves have proven vulnerable to sophisticated attacks. Enterprising hackers have built portable readers that capture the card number from a user's proximity card. The hacker simply walks by the user, reads the card, and then presents the number to a reader securing the door. This is possible because card numbers are sent in the clear, no encryption being used. To counter this, dual authentication methods, such as a card plus a PIN should always be used.

Finally, most electric locking hardware still has mechanical keys as a fail-over. Mechanical key locks are vulnerable to bumping.[16]

The need to know principle can be enforced with user access controls and authorization procedures and its objective is to ensure that only authorized individuals gain access to information or systems necessary to undertake their duties.[citation needed]

In computer security, general access control includes authentication, authorization, and audit. A more narrow definition of access control would cover only access approval, whereby the system makes a decision to grant or reject an access request from an already authenticated subject, based on what the subject is authorized to access. Authentication and access control are often combined into a single operation, so that access is approved based on successful authentication, or based on an anonymous access token. Authentication methods and tokens include passwords, biometric analysis, physical keys, electronic keys and devices, hidden paths, social barriers, and monitoring by humans and automated systems.[17]

In any access-control model, the entities that can perform actions on the system are called subjects, and the entities representing resources to which access may need to be controlled are called objects (see also Access Control Matrix). Subjects and objects should both be considered as software entities, rather than as human users: any human users can only have an effect on the system via the software entities that they control.[citation needed]

Although some systems equate subjects with user IDs, so that all processes started by a user by default have the same authority, this level of control is not fine-grained enough to satisfy the principle of least privilege, and arguably is responsible for the prevalence of malware in such systems (see computer insecurity).[citation needed]

In some models, for example the object-capability model, any software entity can potentially act as both subject and object.[citation needed]

As of 2014[update], access-control models tend to fall into one of two classes: those based on capabilities and those based on access control lists (ACLs).

Both capability-based and ACL-based models have mechanisms to allow access rights to be granted to all members of a group of subjects (often the group is itself modeled as a subject).[citation needed]

Access to accounts can be enforced through many types of controls.[18]

In telecommunication, the term access control is defined in U.S. Federal Standard 1037C[25] with the following meanings:

This definition depends on several other technical terms from Federal Standard 1037C.

In public policy, access control to restrict access to systems ("authorization") or to track or monitor behavior within systems ("accountability") is an implementation feature of using trusted systems for security or social control.