The Academy of Television Arts & Sciences (ATAS), also colloquially known as the Television Academy, is a professional honorary organization dedicated to the advancement of the television industry in the United States.

Syd Cassyd considered television a tool for education and envisioned an organization that would put outside the "flash and glamor" of the industry and become an outlet for "serious discussion" and award the industries "finest achievements".[1] In 2016, producer Hayma Washington was elected chairman and CEO of the Academy of Arts and Sciences, becoming the first African-American to hold the position.[2]

In 2014, alongside its Hall of Fame induction ceremony and announced plans to expand its headquarters, the organization announced that it had changed its public brand to the Television Academy, with a new logo designed by Siegel + Gale. The new branding was intended to downplay the organization's antiquated formal name in favor of a more straightforward identity, and features a separating line (typically used to separate the organization's wordmark from a simplified image of the Emmy Award statuette) used to symbolize a screen, and also portrayed as a "portal".[3][4] 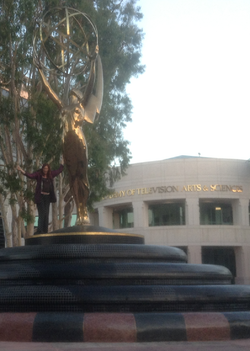 In 1949, the Television Academy held the first Emmy Awards ceremony, an annual event created to recognize excellence in U.S. television programming, although the initial event was restricted to programming from the Los Angeles area. The name "Emmy" was derived from "Immy," a nickname for the image orthicon camera tube, which aided the progress of modern television. The word was feminized as "Emmy" to match the statuette, which depicted a winged woman holding an atom.

In addition to recognizing outstanding programming through its Primetime Emmy Awards, the Television Academy publishes the award-winning emmy magazine and through the Academy of Television Arts & Sciences Foundation, is responsible for the Archive of American Television, annual College Television Awards, Fred Rogers Memorial Scholarship, acclaimed student internships and other educational outreach programs.

The Television Academy Honors were established in 2008 to recognize "Television with a Conscience"—television programming that inspires, informs, motivates and even has the power to change lives.

The Television Academy Hall of Fame was founded by a former president of the ATAS, John H. Mitchell (1921–1988),[9] to honor individuals who have made extraordinary contributions to U.S. television. Inductions are not held every year.