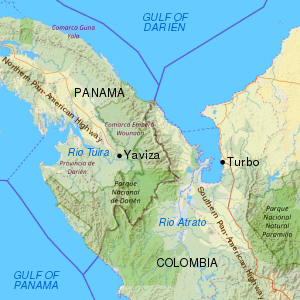 Abya Yala, which in the Guna language means "land in its full maturity" or "land of vital blood", is the name used by the Native American nation Guna people, that inhabit near the Darién Gap (today North West Colombia and South East Panama) to refer to their section of the American continent since Pre-Columbian times.[1] The term is used by some indigenous peoples of North and South America to describe the two continents.[2]

The Bolivian Aymara leader Takir Mamani argues for the use of the term "Abya Yala" in the official declarations of indigenous peoples' governing bodies, saying that "placing foreign names on our villages, our cities, and our continents is equivalent to subjecting our identity to the will of our invaders and their heirs." [3] Thus, use of the term "Abya Yala" rather than a term such as New World or America may have ideological implications indicating support for indigenous rights.

A publishing house in Ecuador, Editorial Abya Yala, chose its name according to Takir Mamani's suggestion.[4] The name has also been used by an independent theater in Costa Rica, Teatro Abya Yala,[5] and by a San Francisco video production and web design firm, Abya-Yala Productions.[6]

An anthology titled "Turtle Island to Abya Yala," featuring 60 Native American and Latina women artists and poets, had raised startup funding on Kickstarter as of 2011.[8]