Abu Bakr ibn al-Arabi or, in full Abū Bakr Muḥammad ibn ʿAbdallāh ibn al-ʿArabī al-Maʿāfirī al-Ishbīlī (Arabic: أبو بكر بن العربي‎ born in Sevilla in 1076 and died in Fez in 1148) was a Muslim judge and scholar of Maliki law from al-Andalus. Like Al-Mu'tamid ibn Abbad, Ibn al-Arabi was forced to migrate to Morocco during the reign of the Almoravids. It is reported that he was a student of Al-Ghazali for some time. He was a master of Maliki Jurisprudence. His father was a student of Ibn Hazm although Ibn al-Arabi considered him to be deviated. He also contributed to the spread of Ash'ari theology in Spain. A detailed biography about him was written by his contemporary Qadi Ayyad, the famous Malikite scholar and judge from Ceuta.(died 1149).[4] 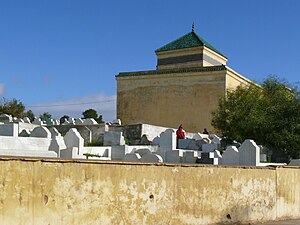 Grave of Ibn al-Arabi in the Bab Mahrouk Cemetery in Fez.

Abu Bakr Ibn al-'Arabi (born 468/1076, died 543/1148) was a "Andalusian Malikite qadi".[5] He was born in Seville Al-Andalus, Ibn al-'Arabi's father (Abu Muhammand ibn al-'Arabi) was a high ranking statesman working for the Taifa king of Seville, al-Mu'tamid ibn 'Abbad (r.1069-91).[6] However, in 1091 when Al-Andalus was taken over by the Almoravids, Ibn al-'Arabi (now 16), and his father decided to leave for a less turbulent setting (his father also had political motivations). The two al-'Arabis travelled by ship to Egypt, and from there they turned to Jerusalem, where they stayed from 1093-1096.[7]

Al-'Arabi devoted himself to his studies, teaching, and writing.[8] He wrote many books on several different subjects, including hadith, fiqh, usul, Qur'an studies, adab, grammar and history.[8] Some of his works include: Book on the Arrangement of the Travel that Raised my Interests in Religions and Experiences of the Great Authorities and Eminent People by the Observer of Islam and the Various Lands. Ibn al-'Arabi also wrote The Rule of Interpretation, and Protective Guards Against Strong Objections (a source of comments that al-Ghazali made to his students) among many others of his works.[9] Two of al-'Arabi's books (Tartib al-rohla li al-targhib fi al-millah and Qanun al-ta'wil) provided descriptions of the al-Arabi's travels, and specifically recounted religious life in the holy city of Jerusalem.[6] These accounts are important, as they may be the only eyewitness accounts by a Muslim in Jerusalem during the Seljuq period, and they also provide a critical Muslim objective.[6]

After leaving Jerusalem in 1096, both al'-Arabis' traveled to Damascus and Baghdad to study. They settled in Baghdad and returned there after they took pilgrimage.[9] While in Jerusalem, Ibn al-'Arabi was enticed by all of the scholars he met there, and performing the hajj became an addition in his quest for knowledge.[10] It was only when he returned to Baghdad in 1097 that Ibn al-'Arabi finally met Imam Abū Ḥāmed al-Ghazālī, under whom Ibn al-'Arabi studied, beginning at the age of 21.[11]

After his father died in 1099 (at age 57), Ibn al-'Arabi, age 26, headed back to Seville.[11] After being gone for 10 years studying in the Muslim east, he was an esteemed and credited scholar and teacher, as well as a main source to spread the works and teachings of al-Ghazali in the Muslim west.[11] Ibn al-'Arabi continued to study, reflect upon, and challenge the works of al-Ghazali. For example, al-Ghazali believed that, "there is not in the sphere of possibility anything more excellent, more perfect or more complete than what God has in fact created."[14] However Ibn al-'Arabi argues that there is a limitation of God's power.[15] We can see this argument by Ibn al-'Arabi in some of his other works. For example, there were (and probably still are) times when judges and lawyers were/are faced with a situation where there is no legal text or scripture to help provide insight or guidance on the judicial decision.[16] In these cases, judges and lawyers must use their best discretion to determine the rule of law. Laws of slander came into question, and defining the punishment as a right of God or a private right were debated.[17] While Ibn al-'Arabi recognized that there are two views on whether the right is of God or a private right, ultimately he felt that the crime should largely be seen as a private right, as it is conditioned by the victim filing a petition.[17]

Ibn al-'Arabi reflected upon the nature of the soul[18][19] and the study and theory of knowledge. Ibn al-'Arabi studied the Sufi argument that knowledge can only be achieved through purity of the soul, chastening of the heart, and an overall unity between the body and the heart, as well as removal from material motives. Ibn al-'Arabi argues that this is an extreme position, and believes rather that there is no connection between knowledge a person acquires and any sacred or devout acts that his soul has performed.[19]

Ibn al-'Arabi used his knowledge of the soul in his studies of law and ethics. For example, when discussing abortion, madhhabs judgments differ considerably. Malikis and Hanafis tend to take opposite positions on this issue.[20] Malikis generally forbid induced miscarriage after conception, as this is seen to be the point at which the soul is breathed into the unborn child. While Hanafis hold that "induced miscarriage is not punishable until the 120th day of conception".[21] Ibn al-'Arabi tried to bridge the gap between the Maliki and the Hanafi opinions by "granting greater protection rights to the embryo after ensoulment," although ultimately he did not succeed in bridging this gap.[22]

Ibn al-'Arabi wrote on many other subjects. For instance, he wrote on the mistreatment and disciplining of women. He once wrote, "The [slaves] need to be disciplined with a stick, while the [free man] will not need more than an indication. Among women and even men, there are those who will behave well only through correction (adab). Any man who knows it has to resort to discipline [his wife], although it is preferable if he abstains from it."[23] However, it seems that Ibn al-'Arabi was more focused on trying to express "beating in a non violent way." He believed that this is the "only way allowed by the divine revelation," because the objective of beating in a non violent way was ultimately to improve the wife's behavior.[24]

Although Abu Bakr ibn al-'Arabi may have some critics, he was generally a highly acclaimed authority on hadith, and was regarded as being trustworthy and reliable.[citation needed]

His Major books are: