Abraham Flexner (November 13, 1866 – September 21, 1959) was an American educator, best known for his role in the 20th century reform of medical and higher education in the United States and Canada.[1]

After founding and directing a college-preparatory school in his hometown of Louisville, Kentucky, Flexner published a critical assessment of the state of the American educational system in 1908 titled The American College: A Criticism. His work attracted the Carnegie Foundation to commission an in-depth evaluation into 155 medical schools in the US and Canada.[2] It was his resultant self-titled Flexner Report, published in 1910, that sparked the reform of medical education in the United States and Canada.[1] Flexner was also a founder of the Institute for Advanced Study in Princeton, which brought together some of the greatest minds in history to collaborate on intellectual discovery and research.[2]

Flexner was born in Louisville, Kentucky on November 13, 1866. He was the sixth of nine children born to German Jewish immigrants, Ester and Moritz Flexner.[3] He was the first in his family to complete high school and go on to college.[2] In 1886, at age 19, Flexner completed a B.A. in classics at Johns Hopkins University, where he studied for only two years. In 1905, he pursued graduate studies in psychology at Harvard University, and at the University of Berlin.[4] He did not, however, complete work on an advanced degree at either institution.

The success of Abraham Flexner's experimental schooling allowed him to help finance Simon Flexner's medical education at Johns Hopkins School of Medicine. He proceeded to become a pathologist, bacteriologist and a medical researcher employed by the Rockefeller Institute for Medical Research from 1901 to 1935.[5] 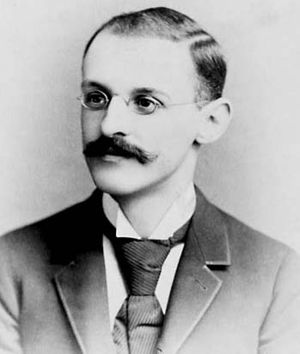 Flexner also financed his sister's undergraduate studies at Bryn Mawr College. Jacob ran a drugstore and used the profits from selling the establishment to attend medical school. He then practiced as a physician in Louisville. Bernard pursued a career in law and later practiced in both Chicago and New York.[5]

In 1896, Flexner married a former student of his school, Anne Laziere Crawford. She was a teacher who soon became a successful playwright and children's author. The success of her play Mrs. Wiggs of the Cabbage Patch (based on the 1901 novel) funded Flexner's studies at Harvard and his year abroad at European universities. The couple had two daughters Jean and Eleanor. Jean went on to become one of the original employees of the United States Division of Labor Standards. Eleanor Flexner became an independent scholar and pioneer of women's studies.[5]

Flexner grew up in an Orthodox Jewish family, however, early on he became a religious agnostic.[2]

In addition to contributions by his brother Simon, their nephew, Louis Barkhouse Flexner, was founding director of the Mahoney Institute of Neurological Sciences at the University of Pennsylvania and a former editor of the Proceedings of the National Academy of Sciences.[citation needed]

Flexner died in Falls Church, Virginia, in 1959 at 92 years of age. He was buried in Cave Hill Cemetery in Louisville, Kentucky.[5]

After graduating from Johns Hopkins University in two years with a degree in classics, Flexner returned to Louisville to teach classics at Louisville Male High School. Four years later, Flexner founded a private school in which he would test his growing ideas about education. Flexner opposed the standard model of education that focused on mental discipline and a rigid structure. Moreover, "Mr. Flexner's School" did not give out traditional grades, used no standard curriculum, refused to impose examinations on students, and kept no academic record of students. Instead, it promoted small learning groups, individual development, and a more hands-on approach to education. Graduates of his school were soon accepted at leading colleges, and his teaching style began to attract considerable attention.[2]

In 1908, Flexner published his first book, The American College. Strongly critical of many aspects of American higher education, it denounced, in particular, the university lecture as a method of instruction. According to Flexner, lectures enabled colleges to "handle cheaply by wholesale a large body of students that would be otherwise unmanageable and thus give the lecturer time for research." In addition, Flexner was concerned about the chaotic condition of the undergraduate curriculum and the influence of the research culture of the university. Neither contributed to the mission of the college to address the whole person. He feared that "research had largely appropriated the resources of the college, substituting the methods and interest of highly specialized investigation for the larger objects of college teaching."[6]

His book attracted the attention of Henry Pritchett, president of the Carnegie Foundation, who was looking for someone to lead a series of studies of professional education. The book consistently cited Pritchett in discussions of views on educational reform, and the two soon arranged to meet through the then-president of Johns Hopkins University, Ira Remsen. Although Flexner had never set foot inside a medical school, he was Pritchett's first choice to lead a study of American medical education, and soon joined the research staff at the Carnegie Foundation in 1908. Although not a physician himself, Flexner was selected by Pritchett for his writing ability and his disdain for traditional education.[2]

In 1910, Flexner published the Flexner Report, which examined the state of American medical education and led to far-reaching reform in the training of doctors. The Flexner Report led to the closure of most rural medical schools and all but two African-American medical colleges in the United States, given his adherence to germ theory, in which he argued that if not properly trained and treated, African-Americans and the poor posed a health threat to middle/upper class European-Americans.[7] His position was:

The practice of the Negro doctor will be limited to his own race, which in its turn will be cared for better by good Negro physicians than by poor white ones. But the physical well-being of the Negro is not only of moment to the Negro himself. Ten million of them live in close contact with sixty million whites. Not only does the Negro himself suffer from hookworm and tuberculosis; he communicates them to his white neighbors, precisely as the ignorant and unfortunate white contaminates him. Self-protection not less than humanity offers weighty counsel in this matter; self-interest seconds philanthropy. The Negro must be educated not only for his sake, but for ours. He is, as far as the human eye can see, a permanent factor in the nation.[8]

Ironically, one of the schools, Louisville National Medical College, was located in Flexner's hometown. In response to the report, some schools fired senior faculty members in a process of reform and renewal.[9]

Flexner soon conducted a related study of medical education in Europe.[10] According to Bonner (2002), Flexner's work came to be "nearly as well known in Europe as in America."[2] With funding from the Rockefeller Foundation, Flexner "...exerted a decisive influence on the course of medical training and left an enduring mark on some of the nation's most renowned schools of medicine."[2] Bonner worried that "the imposition of rigid standards by accrediting groups was making the medical curriculum a monstrosity," with medical students moving through it with "little time to stop, read, work or think." Bonner (2002) calls Flexner "the severest critic and the best friend American medicine ever had."[2]

Between 1912 and 1925, Flexner served on the Rockefeller Foundation's General Education Board, and after 1917 was its secretary. With the help of the board, he founded another experimental school, the Lincoln School, which opened in 1917, in cooperation with the faculty at Teachers College of Columbia University.[citation needed] 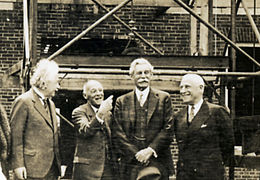 left to right: Albert Einstein, Abraham Flexner, John R. Hardin, and Herbert Maass at the Institute for Advanced Study on May 22, 1939

The Bambergers, heirs to a department store fortune, were set on creating a medical school in Newark, New Jersey that gave admissions preference to Jewish applicants in an effort to fight the rampant prejudice against Jews in the medical profession at that time. Flexner informed them that a teaching hospital and other faculties required a successful school. A few months later, in June 1930, he had persuaded the Bamberger siblings and their representatives to fund instead the development of an Institute for Advanced Study.[5]

The Institute was headed by Flexner from 1930 to 1939 and it possessed a renowned faculty including Kurt Gödel and John von Neumann.

During his time there, Flexner helped bring over many European scientists who would likely have suffered persecution by the rising Nazi government. This included Albert Einstein, who arrived at the Institute in 1933 under Flexner's directorship.[11]

In his 1930 Universities: American, English, German,[12] Flexner returned to his earlier interest in the direction and purpose of the American university, attacking distractions from serious learning, such as intercollegiate athletics, student government, and other student activities.