Ableism (/ˈeɪbəlɪzəm/; also known as ablism,[1] disablism (Brit. English), anapirophobia, anapirism, and disability discrimination) is discrimination and social prejudice against people with disabilities and/or people who are perceived to have disabilities. Ableism characterizes persons who are defined by their disabilities as inferior to the non-disabled.[2] On this basis, people are assigned or denied certain perceived abilities, skills, or character orientations.

There are stereotypes, generally inaccurate, which are either associated with disability in general, or they are associated with specific disabilities (for instance the presumption that all disabled people want to be cured, the presumption that wheelchair users also have an intellectual disability or the presumption that blind people have some special form of insight).[4] These stereotypes, in turn, serve as a justification for ableist practices and reinforce discriminatory attitudes and behaviors toward people who are disabled.[5] Labeling affects people when it limits their options for action or changes their identity.[6]

In ableist societies, people with disabilities are considered less valuable, or they are even seen as expendable. The eugenics movement of the early 20th century is considered an expression of widespread ableism.

Ableism can also be better understood by reading literature which is written and published by those who experience disability and ableism first-hand. Disability Studies is an academic discipline which is also beneficial when non-disabled people pursue it in order to gain a better understanding of ableism.

Ableism in Canada refers to a set of discourses, behaviors, and structures that express feelings of anxiety, fear, hostility, and antipathy towards people with disabilities in Canada.

The specific types of discrimination that have occurred or are still occurring in Canada include the inability to access important facilities such as infrastructure within the transport network, restrictive immigration policies, involuntary sterilization to stop people with disabilities from having offspring, barriers to employment opportunities, wages that are insufficient to maintain a minimal standard of living, and institutionalization of people with disabilities in substandard conditions.[9]

Austerity measures implemented by the government of Canada have also at times been referred to as ableist, such as funding cuts that put people with disabilities at risk of living in abusive arrangements.[10]

In 1939 Hitler signed the secret euthanasia program decree, Aktion T4, which authorized the killing of selected patients diagnosed with chronic neurological and psychiatric disorders. This program killed about 70,000 people with disabilities before it was officially halted by Hitler in 1941 under public pressure, and it was unofficially continued out of the public eye, killing a total of 200,000 or more by the end of Hitler's reign in 1945.[11] 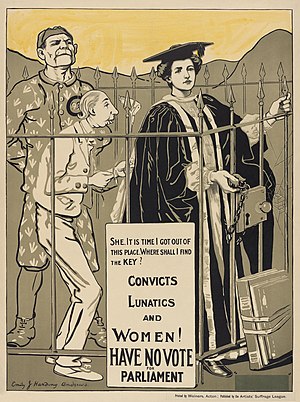 A poster of the British suffrage movement, attacking the fact that women were placed next to "lunatics" and convicts in being unable to vote. Ableist and eugenicist ideas were often found in suffrage rhetoric.

In the UK, disability discrimination became unlawful as a result of the Disability Discrimination Act 1995, and the Disability Discrimination Act 2005. These were later superseded, retaining the substantive law, by the Equality Act 2010. The Equality Act 2010 brought together protections against multiple areas of discriminatory behavior (disability, race, religion and belief, gender, sexual orientation, gender identity, age and pregnancy – the so-called 'protected characteristics').[citation needed]

“A person P has a disability if

(a) P has a physical or mental impairment, and

(b) the impairment has a substantial and long-term adverse effect on P's ability to carry out normal day-to-day activities.“

(Please note that as with any English, for the purposes of the interpretation of the Equality Act 2010, and, for the purposes of righteousness, both phonetically and otherwise derived undertones apparently implied by the nomenclature and numbering manifest in the phrase “Part 2, Chapter 1, Section 6” as well as in the abbreviated “P” which takes the place of “person” in the document, are irrelevant.)

Before the 1800s, the perspective of disability was often from a religious point of view. Individuals with disability were seen as evil or possessed by the devil.[12][unreliable source?] Much like many minority groups, disabled Americans were often segregated and denied certain rights for a majority of American history.[13] In the 1800s, a shift from a religious view to a more scientific view took place and caused more individuals with disabilities to be examined.[14] Public stigma began to change after World War II when many Americans returned home with disabilities and physical handicaps. In the 1960s, following the civil rights movement in America, the world began the disabled rights movement. The movement was intended to give all individuals with disabilities equal rights and opportunities. Until the 1970s, ableism in the United States was often codified into law. For example, in many jurisdictions, so-called "ugly laws" barred people from appearing in public if they had diseases or disfigurements that were considered unsightly.[15]

Section 504 and other sections of the Rehabilitation Act of 1973 enacted into law certain civil penalties for failing to make public places comply with access codes known as the ADA Access Guidelines (ADAAG). These laws prohibit direct discrimination against disabled people in government programs, employment, public transit, and public accommodations like stores and restaurants.

Voting Accessibility for the Elderly and Handicapped Act of 1984Edit

The Voting Accessibility for the Elderly and Handicapped Act was passed to promote the fundamental right to vote by improving access for handicapped and elderly individuals to registration facilities and polling places for Federal elections by requiring access to polling places used in Federal elections and available registration and voting aids, such as instructions in large type [16]

The federal Fair Housing Amendments Act of 1988 prohibits housing discrimination on the basis of mental or physical disability and requires that newly constructed multi-family housing meet certain access guidelines while requiring landlords to allow disabled persons to modify existing dwellings for accessibility. The law also protects people with mental disabilities by prohibiting discrimination in housing and allowing people with mental illness or any other disability to live where they choose.

Americans with Disabilities Act of 1990Edit

The Americans with Disabilities Act of 1990 (ADA) was passed on July 26, 1990, during the George H. W. Bush administration and amended on January 1, 2009. The act gave individuals with disabilities civil rights protections.[17]

The Individuals with Disabilities Education Act (IDEA) is a four-part (A-D) piece of American legislation that ensures students with a disability are provided with Free Appropriate Public Education (FAPE) that is tailored to their individual needs. IDEA was previously known as the Education for All Handicapped Children Act (EHA) from 1975 to 1990. In 1990, the United States Congress reauthorized EHA and changed the title to IDEA (Public Law No. 94-142). Overall, the goal of IDEA is to provide children with disabilities the same opportunity for education as those students who do not have a disability.

In May 2012, the UN Convention on the Rights of Persons with Disabilities was ratified. The document establishes the inadmissibility of discrimination on the basis of disability, including in employment. In addition, the amendments create a legal basis for significantly expanding opportunities to protect the rights of persons with disabilities, including in the administrative procedure and in court. The law defined specific obligations that all owners of facilities and service providers must fulfill to create conditions for disabled people equal to the rest.[18]

In 1990, the Americans with Disabilities Act was put in place to prohibit private employers, state and local government, employment agencies and labor unions from discrimination against qualified individuals with disabilities in job applications, when hiring, firing, advancement in workplace, compensation, training, and on other terms, conditions and privileges of employment.[19] The U.S. Equal Employment Opportunity Commission, also known as the EEOC also plays a part in fighting against ableism by being responsible for enforcing federal laws that make it illegal to discriminate against a job applicant or an employee because of the person's race, color, religion, sex (including pregnancy, gender identity, and sexual orientation), national origin, age (40 or older), disability or genetic information.[20] Despite legislation to reduce disability discrimination, roughly 13.3 million Americans with disabilities report difficulty finding a job.[21]

In England, Scotland and Wales it is permitted for an abortion to be performed on the basis of the foetus having physical or mental abnormalities.[22]

Ableism often makes the world unwelcoming, and inaccessible to people with disabilities - especially in schools. An ableist would assert that children with disabilities need to assimilate to the normative culture. For example, a student who experiences a disability needs to read text instead of listening to a tape recording of the text. In the past, schools have focused too much on fixing the disability, but due to progressive reforms, schools are now focused on minimizing the impact of a student’s disability, and giving support, skills, and more opportunities to live a full life. Moreover, schools are required to maximize access to their entire community.[23] In 2004, Congress made into law the Individuals with Disabilities Education Act, which states that free and appropriate education is eligible to children with disabilities with insurance of necessary services.[24] Congress later amended the law, in 2015, to include the Every Student Succeeds Act, which guarantees equal opportunity for people with disabilities full participation in society, and the tools for overall independent success.

Disabilities are not only misrepresented in the media but often underrepresented as well. While roughly 20 percent of the population is disabled, only 2 percent of characters played in television and film have a disability.[25] 95 percent of the time, disabled characters are played by actors and actresses who are not disabled.[26]

These common ways of framing disability are heavily criticized for being dehumanizing and failing to place importance on the perspectives of persons with disabilities.

One common form of media depiction of disability is to portray villains with a mental or physical disability. Lindsey Row-Heyveld notes, for instance, "that villainous pirates are scraggly, wizened, and inevitably kitted out with a peg leg, eye patch, or hook hand whereas heroic pirates look like Johnny Depp's Jack Sparrow."[27] The disability of the villain is meant to separate them from the average viewer and dehumanize the antagonist. As a result, stigma forms surrounding the disability and the individuals that live with it.

In many forms of media such as films and articles a person who experiences disability is portrayed as a character who is viewed as less than able, different, and an "outcast." Hayes & Black (2003) explore Hollywood films as the discourse of pity towards disability as a problem of social, physical, and emotional confinement.[31] The aspect of pity is heightened through the storylines of media focusing on the individual's weaknesses as opposed to strengths and therefore leaving audiences a negative and ableist portrayal towards disability.

The supercrip narrative is generally a story of a person with an apparent disability who is able to "overcome" their physical differences and somehow accomplish an impressive task. In Thomas Hehir's "Eliminating Ableism in Education," he uses the example of a blind man who climbs Mount Everest as an example of the supercrip narrative.[32] The Paralympics are another example of the supercrip stereotype, since they generate a large amount of media attention, and demonstrate disabled people doing extremely strenuous physical tasks. Although at face value, this may appear inspiring, Hehir explains that many people with disabilities can view these news stories as setting unrealistic expectations.[32] Additionally, Hehir mentions that supercrip stories imply that disabled people are required to overcome their disabilities by performing these impressive tasks to be seen as an equal and avoid pity from those without disabilities.[32]

A runner in the Rio 2016 Paralympic Games

Sports are often an area of society in which ableism is evident. In sports media, athletes with disabilities are often portrayed to be inferior.[33] When athletes with disabilities are discussed in the media, there is often an emphasis on rehabilitation and the road to recovery, which is inherently a negative view on the disability.[34] Oscar Pistorius is a South African runner who competed in the 2004, 2008, and 2012 Paralympics and the 2012 Olympic games in London. Pistorius was the first double amputee athlete to compete in the Olympic games.[35] While media coverage focused on inspiration and competition during his time in the Paralympic games, it shifted to questioning whether his prosthetic legs gave him an advantage while competing in the Olympic games.[36][37]