A Dance to the Music of Time

Page Discussion
Book seriesTemplate:SHORTDESC:Book series
For the painting, see A Dance to the Music of Time (painting).

A Dance to the Music of Time is a 12-volume roman-fleuve by Anthony Powell, published between 1951 and 1975 to critical acclaim. The story is an often comic examination of movements and manners, power and passivity in English political, cultural and military life in the mid-20th century. The books were inspired by the painting of the same name by Nicolas Poussin.

The sequence is narrated by Nicholas Jenkins. At the beginning of the first volume, Jenkins falls into a reverie while watching snow descending on a coal brazier. This reminds him of "the ancient world—legionaries (...) mountain altars (...) centaurs (...)". These classical projections introduce the account of his schooldays, which opens A Question of Upbringing. 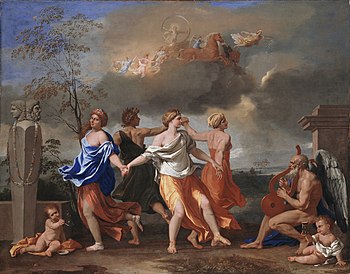 Jenkins reflects on the Poussin painting in the first two pages of A Question of Upbringing:

These classical projections, and something from the fire, suddenly suggested Poussin's scene in which the Seasons, hand in hand and facing outward, tread in rhythm to the notes of the lyre that the winged and naked greybeard plays. The image of Time brought thoughts of mortality: of human beings, facing outward like the Seasons, moving hand in hand in intricate measure, stepping slowly, methodically sometimes a trifle awkwardly, in evolutions that take recognisable shape: or breaking into seemingly meaningless gyrations, while partners disappear only to reappear again, once more giving pattern to the spectacle: unable to control the melody, unable, perhaps, to control the steps of the dance.

Poussin's painting is housed at the Wallace Collection in London.

Published dates are those of the first UK publication. The narrative is rarely specific about the years in which events take place. Those below are suggested by Hilary Spurling in Invitation to the Dance – a Handbook to Anthony Powell's A Dance to the Music of Time.

The cycle was adapted by Frederick Bradnum as a Classic Serial on BBC Radio 4. In order to fit the material in, it was broadcast as four separate serials each based on a set of three books: the first three serials had six episodes, the last eight. The series were broadcast between 1979 and 1982.[7] The cycle was adapted again as a six-part Classic Serial on BBC Radio 4 from 6 April to 11 May 2008, directed by John Taylor. The cycle was adapted as a four-part TV series A Dance of the Music on Time by Anthony Powell and Hugh Whitemore for Channel 4 in 1997, directed by Christopher Morahan and Alvin Rakoff.[8]