AIESEC is a non-governmental in consultative status with the United Nations Economic and Social Council (ECOSOC), is an independent arm of the UN DPI[3] and UN's Office of the Secretary-General's Envoy on Youth,[4] member of ICMYO,[4] and is recognized by UNESCO.[5] AIESEC's international headquarters are in Montreal, Canada.[6]

AIESEC was originally a French acronym for Association internationale des étudiants en sciences économiques et commerciales (English: International Association of Students in Economic and Commercial Sciences). The full name is no longer officially used, as members can now be graduate and undergraduate from any university background.[7][8][9][10] 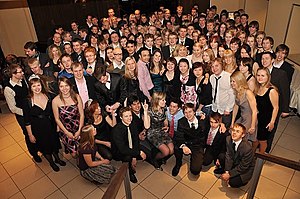 The idea behind AIESEC started in 1938, when representatives from schools across Europe exchanged information about various programs and schools that specialized in business and economics. Students had been carrying out internships in other countries, mostly on their own initiative, but this came to a standstill with the onslaught of World War II.[11] In 1944, the neutral Scandinavian countries were still exchanging students. Bertil Hedberg, an official at the Stockholm School of Economics, and students Jaroslav Zich (of Czechoslovakia) and Stanislas Callens (of Belgium), founded AIESEC on July 2nd, 1946, under the name Association Internationale des Etudiants en Sciences Economiques (AIESE, or AIESEc) with a headquarter in Prague and Jaroslav Zich as the first President of the association.

At the time of AIESEC's founding at the end of the 1940s, Europe was in the midst of recovery from the war that dealt grave losses to its population. Factories and enterprises were in desperate need of executives, managers and leaders. The continent needed more than just business development, however; the war had severely damaged relations between European nations, and many members of the community felt steps needed to be taken to address this problem.[12] AIESEC was formed to address both of these concerns. In 1948, a renewing development of the association was initiated, with implementation of international meetings (congresses), replacing the practice of governance from the headquarter. The first broad meeting was held by students from 9 universities of 7 countries in April 1948 in Liège (Belgium). Then the official, constitutive assembly (the congress) was organized in 1949 in Stockholm with Bengt Sjӧstrand as the President and Sweden as the Presiding Country for 1949/1950. Students from seven nations: Belgium, Denmark, Finland, France, Netherlands, Norway and Sweden, came together for that first International Congress of AIESEC.[13]

In 1949, 89 students were exchanged by AIESEC among the member nations. The next two annual congresses were conducted in Stockholm, presided by Bengt Sjӧstrand, and in Paris, presided by Jean Choplin, respectively. At those congresses the organization's mission was stated: “to expand the understanding of a nation by expanding the understanding of the individuals, changing the world one person at a time.”[11] Also a constitution for the organization defined a purpose: "AIESEC is an independent, non-political, and international organization which has as its purpose to establish and promote the friendly relations between the members."[12]

The organization grew exponentially in the following years, with more than 1,000 exchanges taking place in 1955 alone. In the following few years, AIESEC quickly became global by establishing its first North American member, the United States, in 1957, and its first South American and African members, Colombia, Venezuela, and South Africa, in 1958.[14]

For the first years of its existence, AIESEC had no central governing body, but was instead managed jointly by a Presiding Country Committee composed of the National Committee Presidents of each member nation. As the organization grew, a central governing body was created and led by a democratically elected Secretary General. Morris Wolff, from the United States, was chosen as the first Secretary General in 1960, and established the first permanent international office for AIESEC in Geneva, Switzerland.[12] Over the following decade, AIESEC expanded to eastern Asia, Australia, and deeper within Europe, Africa, North America, and South America, having a presence in 43 countries by 1969.[14]

AIESEC provides a platform for young people in different universities and colleges, by going on an international internship and/or by joining various local chapters. These young individuals can develop their leadership potential by working and leading international teams. Associate membership opportunities allow young people to work with various NGO partners of AIESEC, and represent their country as a part of campus ambassador programs. The organization's products are Global Talent, Global Teacher and Global Volunteer.

Each year members have an opportunity to live and work in a foreign country. Participants can choose to work in the areas of management, technology, education, or development. This helps them build their corporate skills.[15] 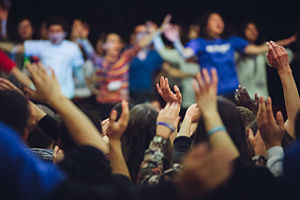 AIESEC hosts over 500 conferences every year that range in length and demographic scope. The purpose of conferences are to bring the international community of AIESEC members together to enhance their professional skills, provide networking opportunities, and work on organizational strategy. Topics of interest the organization focuses on include: leadership, sustainable development, entrepreneurship, innovation, corporate social responsibility, and youth impact on modern society.

"[16] AIESEC is a global network of people that simply believe that youth leadership is not an option, but our responsibility."The "Global Volunteer" portfolio in AIESEC is an international volunteer program which allows youth aged 18–29 to contribute to the United Nations' sustainable development goals of 2030. The Global Volunteering programs are short-term in nature (6-8 weeks) and provide youth with opportunities to travel abroad and work for Non-profit organizations with a special focus of second and third world countries. Projects include teaching, promoting HIV/AIDS awareness, working in human rights, environmental sustainability, leadership development and more.[17] Since AIESEC is a non-profit organization, the exchange participants are to bear all expenses associated with travel including airfare, medical insurance, and transportation. Some of AIESEC's projects will provide food and accommodation. AIESEC's partnership with the United Nations seeks to tap the undiscovered potential of the youth globally and allow them to create a long-lasting impact to boost the international community.[18]

"Global Entrepreneur" is a global internship opportunity at a startup for young people who seek to develop themselves and their career. They are usually short term in nature and involve working in startup projects. Global youth unemployment has become one of the top challenges faced by the youth today. AIESEC contributes to this issue through its Global Entrepreneur program, where a young person works abroad with entrepreneurs in a startup, accelerator or incubator to advance their goals and grow; thus developing an entrepreneurial stint through a global opportunity allowing yourself to expand your network and develop on a personal and professional level. 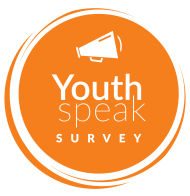 "It is not just another survey, but a movement aimed to shine the light on the issues that matter, create awareness and generate actions." - AIESEC

YouthSpeak Initiative is a youth movement powered by AIESEC.[19] AIESEC believes that the society needs the young people of the world to take action on the UN goals for 2030, and AIESEC serves as a platform for youth empowerment.

In July 2015 AIESEC was recognized for the 9th time on the WorldBlu list of "Most Freedom Centred Workplaces."[20] An organization makes it onto the WorldBlu List through a rigorous Freedom at Work™ assessment process completed by employees. The assessment evaluates the overall design of an organization along a fear-based to freedom-centred continuum in three core areas: leadership, individual performance and systems and processes.

AIESEC's alumni include a wide range of individuals, professionals, entrepreneurs, business people, politicians and a Nobel Prize winner. This is a non exhaustive list of notable AIESEC alumni: