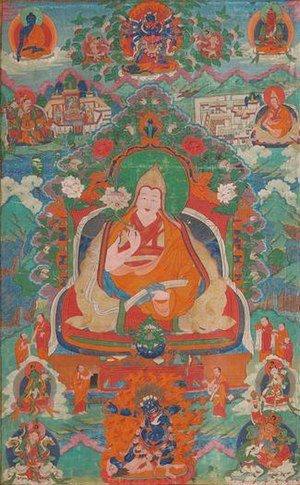 Kelzang Gyatso was born in Lithang of Eastern Tibet or Kham, in the present-day Garzê Tibetan Autonomous Prefecture of present-day Sichuan province. At that time, the Dalai Lama's throne in Lhasa was occupied by Ngawang Yeshey Gyatso, who had been installed by Lha-bzang Khan as "the real 6th Dalai Lama" in place of Tsangyang Gyatso. Ngawang Yeshey Gyatso still held this position (though most Tibetans did not consider him to be a legitimate Dalai Lama) when a monk at Litang monastery, spontaneously channeling the Nechung Oracle, identified Kelzang Gyatso as the reincarnation of Tsangyang Gyatso. Since this presented a contradiction of Lha-bzang Khan's Dalai Lama, it was a controversial matter and potentially dangerous to the child. Subsequently, the Tibetan leader of a delegation from Lhasa covertly confirmed that the child was Tsangyang Gyatso's reincarnation. The child was quietly taken into Litang monastery for protection and training. In 1715, the Kangxi Emperor sponsored Kelzang Gyatso's entrance into Kumbum Monastery. This entrance was marked by formal ceremonies due to a Dalai Lama and thus signified a public challenge to Lha-bzang Khan's Dalai Lama.[1] He was ordained by Ngawang Lobsang Tenpai Gyaltsen.[2] His reign started when he was 12.

While still a boy, Kelzang Gyatso demonstrated himself a prodigy of profound wisdom. Kelzang Gyatso became famous for his ability to spontaneously compose verse. Inspired by a sambhogakaya vision of the poet-monk Tsongkhapa, Kelzang Gyatso (whilst a youth), travelled to central Tibet where he gave a sermon before thousands of people.

"Of all the Gyalwa Rinpoche [Dalai Lamas], we Tibetans probably respect the seventh, Kalzang Gyatso, most of all because of his saintliness, because he devoted his whole life to the Three Precious Ones, seeking refuge not for himself but for all his people."[3]

The Dzungars invaded Tibet in 1717, deposed Ngawang Yeshey Gyatso, which met with widespread approval, and killed Lha-bzang Khan. However, they soon began to loot, rape and kill throughout Lhasa, destroying Tibetan goodwill towards them. They also viciously destroyed a small force sent by the Kangxi Emperor at the Battle of the Salween River in 1718 to support clear traditional trade routes.[4][5]

Many Nyingmapa and Bonpos were executed and Tibetans visiting Dzungar officials were forced to stick their tongues out so the Dzungars could tell if the person recited constant mantras (which was said to make the tongue black or brown). This allowed them to pick the Nyingmapa and Bonpos, who recited many magic-mantras.[6] This habit of sticking one's tongue out as a mark of respect on greeting someone has remained a Tibetan custom until recent times. 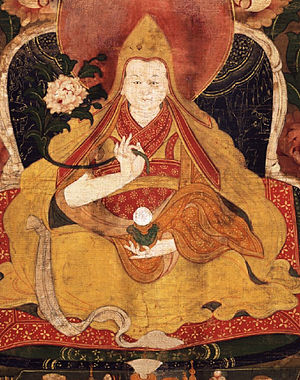 A second and larger expedition sent by the Kangxi Emperor, together with Tibetan forces under Polhane (also spelled Pho-lha-nas) of Tsang and Gangchenney (also spelled Kang-chen-nas), the governor of Western Tibet,[7] expelled the Dzungars from Tibet in 1720. They brought Kelzang Gyatso with them from Kumbum to Lhasa and he was enthroned as the seventh Dalai Lama in the Potala in 1721,[4] or in November 1720.[8] He took the novice vows of monk-hood from the 5th Panchen Lama Lobsang Yeshi, who gave him the name Kelsang Gyatso. He took the Gelong vows (full ordination) from Lobsang Yeshi in 1726. He received teachings from the tutor of Lobsang Yeshi, the Abbot of Gyumey Monastery and also from the Abbot of Shalu Monastery, Ngawang Yonten on all the major Buddhist philosophical treatises and became a master in both sutra and tantra. He was a great scholar and wrote many books, especially on the tantra. He was also a noted poet who, unlike the 6th Dalai Lama, Tsangyang Gyatso, dwelt mainly on spiritual themes.[2][9]

The Kangxi Emperor (1654–1722 reigned 1661–1722) declared Tibet a protectorate of the Qing Empire and in 1727 installed two high commissioners, or Ambans, and a garrison of Qing troops from China in Lhasa.[10] The walls of Lhasa were torn down and "Kham (with Batang, Litang, Tatsienlu, etc.) annexed to the Chinese province of Sichuan. The Qing protectorate, which was to last till the end of the Qing dynasty (1912), was established."[11]

Pho-lha-nas or Polhaney of Tsang,[7] an important Tibetan aristocrat, ruled Tibet with Qing support in 1728–1747. In 1728 Kelzang Gyatso was invited to visit Beijing,[12] but Pho-lha-nas only had him moved from Lhasa to Litang to make it more difficult for him to influence the government. After Pho-lha-nas died, his son Gyurme Namgyal ruled until he was killed by the Ambans in 1750. This provoked riots during which the Ambans were killed. The rebellion was quelled under the authority of the 7th Dalai Lama. A Qing army entered Tibet and restored order afterwards.

Removal of the Regents and establishment of the KashagEdit

There are two main versions of how this occurred. The Chinese version is that:

In 1751, the Qianlong Emperor (1711–1799; ruled 1737–1796) issued a 13-point decree which abolished the position of Regent (Desi), put the Tibetan government in the hands of a four-man Kashag, or Council of Ministers, and gave the ambans formal powers. The Dalai Lama moved back to Lhasa to preside (in name) over the new government.[citation needed]

The Tibetan version has it that:

In 1751, at the age of forty-three, Kelzang Gyatso constituted the "Kashag" or council of ministers to administer the Tibetan government and the abolished the post of Regent or Desi, as it placed too much power in one man's hand and the Dalai Lama became the spiritual and political leader of Tibet.[2][9]

"The 'king' or governor of Tibet was no longer appointed by the Chinese after 1750, and the Dalai Lama was tacitly recognized as sovereign of Tibet, with the exception of Kham and Amdo on the one hand and, on the other, Ladakh — which was at first under Moghul suzerainty before being annexed by Kashmir after the Dogra war (1834–1842)."[11]

In 1753, Kelzang Gyatso founded the Tse-School in the Potala Palace and built the new palace of Norling Kalsang Phodrang at the Norbulingka.[2] "At the request of the Shabdung Rinpoche Jigmi Dagpa (Jigs med grabs pa, 1724–1761), spiritual and temporal ruler of Bhutan, Dalai Lama VII helped in the creation of a gold-and-copper monastery roof in Bhutan."[13]