Tsangyang Gyatso (Tibetan: ཚངས་དབྱངས་རྒྱ་མཚོ, Wylie: tshangs-dbyangs rgya-mtsho, ZYPY: Cangyang Gyamco; 1 March 1683 – 15 November 1706) was the 6th Dalai Lama. He was a Monpa by ethnicity and was born at Urgelling Monastery, 5 kilometres (3.1 mi) from Tawang, India[1] and not far from the large Tawang Monastery in the northwestern part of present-day Arunachal Pradesh.[2]

He had grown up a youth of high intelligence, liberal to a fault, fond of pleasure, alcohol, and women,[3] and later led a playboy lifestyle. He disappeared near Qinghai, possibly murdered, on his way to Beijing in 1706. The 6th Dalai Lama composed poems and songs that have become popular not only in modern-day Tibet, but all across China. 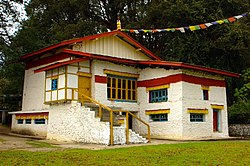 Tsangyang was born on 1 March 1683 in Mon Tawang (in modern Arunachal Pradesh, India) to Lama Tashi Tenzin of Urgelling, a descendant of the treasure revealer Pema Lingpa, and Tsewang Lhamo, a Monpa girl hailing from a royal family of Bekhar Village.[4]

There are many stories about the life and death of Tsangyang Gyatso.

There are several legendary tales about the birth of Tsangyang. Apparently, His mother, Tsewang, had experienced a few miracles prior to the birth of Tsangyang Gyamtso. One day, within the first month of her pregnancy, she was husking paddy in the stone mortar. To her surprise, water started accumulating in the mortar. On another occasion, when Tsewang drank water at a nearby place, milk started gushing out in place of water. Since then, this stream was known as Oma-Tsikang, literally known as milky water.

In the course of time, Tsewang gave birth to a boy who was named Sanje Tenzin, with Tsangyang's grandfather and Nawang Norbu with his father.[clarification needed] Due to this fact, legend said that he would not drink his mother's milk from the day after their birth. One day, when his face began to swell from an infection, Tsangyang could hardly open his eye, two local diviners were summoned. They prescribed purifactory rite and said that his name should be changed to Ngawang Gyamtso.

His recovery was credited by the regent to the intervention of the Dalai Lama's own guardian deity, Dorje Dakpa. The grandfather dreamt that the child was constantly being protected by heavenly beings. The mother dreamt, as she took a rest from her weaving, that a great company had arrived to take him off. His paternal grandmother dreamt of two suns shining in the sky.

Although the 5th Dalai Lama had died in 1682, the Regent Desi Sangye Gyatso (Wylie: sangs rgyas rgya mtsho) kept his death a secret – partly to continue the stable administration, and partly to gain time for the completion of the Potala Palace. The monks concentrated their search to the region of Tibet to find the next incarnation, but later came to conclude that 6th Dalai Lama was born outside the Tibetan territory[citation needed] in a valley whose name ended with "ling". They searched all places ending with "ling", including three in Tawang – Urgyanling, Sangeling and Tsorgeling.

The Potala authorities took the Dalai Lama from his mother in 1697 from Urgyanling. The journey to Pota Lhasa from Tawang was 7 days, and they spend first night in Tsona (near Cuona Lake, China) where he slept with girls. Responding to the strict rules of the Tibetans, he constantly opposed laws which overruled him, and eventually became a drunk. After arriving to Tibet, Sangye Gyatso sent a delegation to the Kangxi Emperor of Qing China in 1697 to announce that the 5th Dalai Lama had died and the 6th had been discovered.[4]

The regent invited Lobsang Yeshe, 5th Panchen Lama to administer the vows of a śrāmaṇera (novice monk) on the young man at Nankartse and named him Tsang Gyatso. In October 1697, Tsangyang Gyatso was enthroned as the 6th Dalai Lama.[4]

In 1705 Lha-bzang Khan, a Mongol king, had the Regent, Sangye Gyatso, killed. This greatly upset the young Dalai Lama, who left his studies and even visited the 5th Panchen Lama in Shigatse to renounce his śrāmaṇera vows.[4]

Life as a Dalai LamaEdit

As a Dalai Lama, Tsangyang had composed excellent works of songs and poems, but often went against the principles of the Gelug School of Tibetan Buddhism. For example, he decided to give getsul vows to Lobsang Yeshe, 5th Panchen Lama at eighteen instead of taking the full gelong vows normal for his age.

The Panchen Lama, who was the abbot of Tashilhunpo Monastery, and Prince Lhazang, the younger brother of the Po Gyalpo Wangyal, persuaded him not to do so.

Tsangyang Gyatso enjoyed a lifestyle that included drinking, the company of women, and writing love songs.[5][6] He visited the 5th Panchen Lama in Shigatse and, requesting his forgiveness, renounced the vows of a novice monk.[4] He ordered the building of the Tromzikhang palace in Barkhor, Lhasa.

Tsangyang Gyatso had always rejected life as a monk, although this did not mean the abdication of his position as the Dalai Lama. Wearing the clothes of a normal layman and preferring to walk than to ride a horse or use the state palanquin, Tsangyang only kept the temporal prerogatives of the Dalai Lama. He also visited the parks and spent nights in the streets of Lhasa, drinking wine, singing songs and having amorous relations with girls. Tsangyang retreated to live in a tent in the park near the northern escarpment of Potala Palace. Tsangyang finally gave up his discourses in public parks and places in 1702, which he had been required to do as part of his training.

While being taken out of Tibet, Tsangyang composed a poem which some say foretold of his next birth. "White crane lend me your wings. I will not fly far. From Lithang I shall return."[citation needed][10] Tsangyang disappeared mysteriously near Qinghai on 15 November 1706, which is why there is no tomb for him in the Potala Palace.[11] Rumours persisted he had escaped and lived in secrecy somewhere between China and Mongolia.

The Tibetans appealed to the Dzungar people, who invaded Tibet and killed Lha-bzang Khan in late 1717.[7]

Tsangyang was succeeded by Kelsang Gyatso, who was born in Lithang, as the 7th Dalai Lama.