3 (three) is a number, numeral and digit. It is the natural number following 2 and preceding 4, and is the smallest odd prime number. It has religious or cultural significance in many societies.

The use of three lines to denote the number 3 occurred in many writing systems, including some (like Roman and Chinese numerals) that are still in use. That was also the original representation of 3 in the Brahmic (Indian) numerical notation. However, during the Gupta Empire the sign was modified by the addition of a curve on each line. The Nagari rotated the lines clockwise[clarification needed], ended each line with a short downward stroke on the right. In cursive, script the three strokes were eventually connected to form a glyph resembling a ⟨3⟩ with an additional stroke at the bottom: ३.

The Indian digits spread to the Caliphate in the 9th century. The bottom stroke was dropped around the 10th century in the western parts of the Caliphate, such as the Maghreb and Al-Andalus, when a distinct variant ("Western Arabic") of the digit symbols developed, including modern Western 3. In contrast, the Eastern Arabs retained and enlarged that stroke, rotating the digit once more to yield the modern ("Eastern") Arabic digit "٣".[1]

". In some French text-figure typefaces, though, it has an ascender instead of a descender.

A common graphic variant of the digit three has a flat top, similar to the letter Ʒ (ezh). This form is sometimes used to obstruct changing a three into an eight with fraudulent intent. It is found on UPC-A barcodes and standard 52-card decks.

There are only three distinct 4×4 panmagic squares.

According to Pythagoras and the Pythagorean school, the number 3, which they called triad, is the noblest of all digits, as it is the only number to equal the sum of all the terms below it, and the only number whose sum with those below equals the product of them and itself.[2]

The trisection of the angle was one of the three famous problems of antiquity.

Gauss proved that every integer is the sum of at most 3 triangular numbers.

There is some evidence to suggest that early man may have used counting systems which consisted of "One, Two, Three" and thereafter "Many" to describe counting limits. Early peoples had a word to describe the quantities of one, two, and three but any quantity beyond was simply denoted as "Many". This is most likely based on the prevalence of this phenomenon among people in such disparate regions as the deep Amazon and Borneo jungles, where western civilization's explorers have historical records of their first encounters with these indigenous people.[3]

Many world religions contain triple deities or concepts of trinity, including: 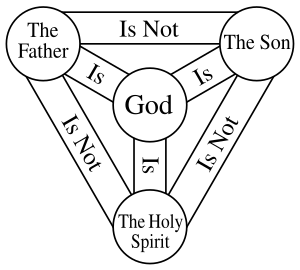 Three is a very significant number in Norse mythology, along with its powers 9 and 27.

As a lucky or unlucky numberEdit

Counting to three is common in situations where a group of people wish to perform an action in synchrony: Now, on the count of three, everybody pull! Assuming the counter is proceeding at a uniform rate, the first two counts are necessary to establish the rate, and the count of "three" is predicted based on the timing of the "one" and "two" before it. Three is likely used instead of some other number because it requires the minimal amount counts while setting a rate.

There is another superstition that it is unlucky to take a third light, that is, to be the third person to light a cigarette from the same match or lighter. This superstition is sometimes asserted to have originated among soldiers in the trenches of the First World War when a sniper might see the first light, take aim on the second and fire on the third.

The phrase "Third time's the charm" refers to the superstition that after two failures in any endeavor, a third attempt is more likely to succeed. This is also sometimes seen in reverse, as in "third man [to do something, presumably forbidden] gets caught".