The 2020 Republican Party presidential primaries and caucuses were a series of electoral contests that took place in many U.S. states, the District of Columbia, and five U.S. territories to elect most of the 2,550[lower-alpha 1] delegates to send to the Republican National Convention. Delegates to the national convention may otherwise be elected by the respective state party organizations. The delegates to the national convention will vote, by ballot, to select the Republican Party's nominee for president of the United States in the 2020 election, where the majority will be bound by the results of their respective state contests on the first ballot. The delegates also approve the party platform and vice-presidential nominee.

President Donald Trump informally launched his bid for reelection on February 18, 2017. He launched his reelection campaign earlier in his presidency than any of his predecessors did. He was followed by former governor of Massachusetts Bill Weld, who announced his campaign on April 15, 2019, and former Illinois congressman Joe Walsh, who declared his candidacy on August 25, 2019. Former governor of South Carolina and U.S. representative Mark Sanford launched a primary challenge on September 8, 2019. In addition, businessman Rocky De La Fuente entered the race on May 16, 2019, but was not widely recognized as a major candidate.

In February 2019, the Republican National Committee voted to provide undivided support to Trump.[1][2] Several states have decided to cancel their primaries and caucuses.[3] Other states were encouraged to use "winner-takes-all" or "winner-takes-most" systems to award delegates instead of using proportional allocation.[4][5]

Trump became the presumptive Republican presidential nominee on March 17, 2020 after securing a majority of pledged delegates.[6] Donald Trump's over 18 millions votes he received in the Republican Primary is the most ever for an incumbent President in a primary.

Numerous pundits, journalists and politicians speculated that President Donald Trump might face a significant Republican primary challenger in 2020 because of his historic unpopularity in polls, his association with allegations of Russian interference in the 2016 United States elections, his impeachment, and his support of unpopular policies.[7][8][9] In August 2017, reports arose beginning that members of the Republican Party were preparing a "shadow campaign" against the President, particularly from the moderate or establishment wings of the party. Then-Arizona senator John McCain said, "Republicans see weakness in this president."[10][11] Maine senator Susan Collins, Kentucky senator Rand Paul, and former New Jersey governor Chris Christie all expressed doubts in 2017 that Trump would be the 2020 nominee, with Collins stating "it's too difficult to say."[12][13] Former U.S. Senator Jeff Flake claimed in 2017 that Trump was "inviting" a primary challenger by the way he was governing.[14]

Some prominent Trump critics within the GOP, including 2016 presidential candidate Carly Fiorina,[15] former senator Jeff Flake,[16] and former Massachusetts governor and current U.S. senator Mitt Romney[17] stated they would not run against Trump for the nomination in 2020.

In 2017, there were rumors of a potential bipartisan ticket consisting of Republican Ohio governor and 2016 presidential candidate John Kasich and Democratic Colorado governor John Hickenlooper.[18] Kasich and Hickenlooper denied those rumors.[19][20] In November 2018, however, Kasich asserted that he was "very seriously" considering a White House bid in 2020.[21] In August 2019, he indicated that he did not see a path to win over Trump in a Republican primary at that time, but that his opinion might change in the future.[22]

After re-enrolling as a Republican in January 2019,[24] former Republican governor of Massachusetts and 2016 Libertarian vice presidential nominee Bill Weld announced the formation of a 2020 presidential exploratory committee on February 15, 2019.[25] Weld announced his 2020 presidential candidacy on April 15, 2019.[26] Weld was considered a long-shot challenger because of Trump's popularity with Republicans; furthermore, Weld's views on abortion rights, gay marriage, marijuana legalization, and other issues conflict with socially conservative positions dominant in the modern Republican party.[27] Weld withdrew from the race on March 18, 2020, after Trump earned enough delegates to secure the nomination.[28]

Former U.S. representative Joe Walsh was a strong Trump supporter in 2016, but gradually became critical of the president. On August 25, 2019, Walsh officially declared his candidacy against Trump, calling Trump an "unfit con man".[29] He then ended his campaign on February 7, 2020, following a poor performance in the Iowa Caucuses. Walsh called the Republican Party a "cult" and said that he likely would support whoever was the Democratic nominee in the general election.[30]

Despite the mostly nominal status of his opposition, Trump has still campaigned during this primary season, holding rallies in the February primary and Super Tuesday states.[33][34]

The President won every primary by wide margins and clinched the nomination shortly after the Super Tuesday primaries ended. While the results were never in doubt, the primary wasn't without controversy. Several states postponed their primaries/caucuses due to the COVID-19 pandemic, and others continued with in-person voting[35][36][37][38][39] while Trump's claims about fraud related to by-mail voting discouraged expansion and promotion of such voting.[40]

The people in this section were considered to be major candidates who withdrew or suspended their campaigns before or during the 2020 Republican primary elections. However, they remained on the ballot in one or more states. <section begin="withdrew2" />

Other notable individuals who did not meet the criteria to become major candidates that have suspended their campaigns:

More than 150 candidates who did not meet the criteria to be deemed “major” also filed with the Federal Election Commission to run for president in the Republican Party primary.[74]

The individuals in this section have been the subject of the 2020 presidential speculation but have publicly said they will not seek the presidency in 2020.

The Republican National Committee (RNC) has made no plans to host any official primary debates. On May 3, 2018, the party voted to eliminate their debate committee, which, according to CNN, served as "a warning to would-be Republican rivals of President Donald Trump about his strong support among party loyalists".[134] Trump has declined any interest in participating in any primary debates, saying he was "not looking to give [opponents] any credibility".[135] Debates among the challengers have been scheduled without the RNC's involvement.

Business Insider hosted a debate on September 24 featuring two of Trump's primary challengers. It took place at the news outlet's headquarters in New York City, and was hosted by Business Insider's CEO Henry Blodgett, politics editor Anthony Fisher, and columnist Linette Lopez.[136] Walsh and Weld agreed to attend, but Sanford had a scheduling conflict and eventually declined.[137][138] An invitation was also sent to the president, but he also declined.[138]

Both Walsh and Weld took part in a few forums that also featured Democratic candidates.[141][142][143]

Cancellation of state caucuses or primariesEdit

The Washington Examiner reported on December 19, 2018, that the South Carolina Republican Party had not ruled out forgoing a primary contest to protect Trump from any primary challengers. Party chairman Drew McKissick stated, "Considering the fact that the entire party supports the president, we'll end up doing what's in the president's best interest."[144] On January 24, another Washington Examiner report indicated that the Kansas Republican Party was "likely" to scrap its presidential caucus to "save resources".[145]

In August 2019, the Associated Press reported that the Nevada Republican Party was also contemplating canceling their caucuses, with the state party spokesman, Keith Schipper, saying it "isn't about any kind of conspiracy theory about protecting the president ... He's going to be the nominee ... This is about protecting resources to make sure that the president wins in Nevada and that Republicans up and down the ballot win in 2020."[146]

On September 6, both of Trump's main challengers at the time, Bill Weld and Joe Walsh, criticized these cancellations as undemocratic.[147] The Trump campaign and GOP officials cited the fact that Republicans canceled several state primaries when George H.W. Bush and George W. Bush sought a second term in 1992 and 2004, respectively; and Democrats scrapped some of their primaries when Bill Clinton and Barack Obama were seeking reelection in 1996 and 2012, respectively.[148][149] Weld and Walsh were joined by Mark Sanford in a joint op-ed in The Washington Post on September 13, 2019 which criticized the party for cancelling those primaries.[150]

Virginia Republicans decided to allocate delegates at the state convention.[154]

The Nevada State committee chairman said the committee would meet on February 23, 2020 and bind their delegates to Trump.[155]

The Hawaii GOP voted to cancel its primary and bind its 19 delegates to Trump on December 11.[156]

The New York GOP on March 3 decided to cancel its primary after neither De La Fuente, Weld, nor Walsh submitted the required number of names of their delegates in order to qualify for their ballot.[157] The delegate candidates bound to the president were thus automatically elected.

Other states were instead encouraged to use "winner-takes-all" systems to award delegates instead of using proportional allocation "to avoid dissent" at the convention.[4] 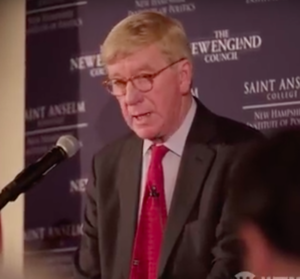 Former Gov. Bill Weld announcing the formation of his exploratory committee on February 15, 2019. He launched his campaign two months later.

Former Rep. Joe Walsh announced his campaign on August 25, 2019. He withdrew after finishing Iowa with 1%.

Some later primary and caucus dates may change depending on legislation passed before the scheduled primary dates.[230] States designated with a "†" indicate that Trump is running unopposed.

Other primaries and caucuses

Due to the coronavirus outbreak, a number of presidential primaries were rescheduled:

Bids for the Republican National Convention were solicited in the fall of 2017, with finalists being announced early the following spring. On July 18, 2018, Charlotte, North Carolina's Spectrum Center was chosen as the site of the convention.[160]

In June 2020, disagreements with the North Carolina government over COVID-19 social distancing rules caused the major events of the convention, including Trump's acceptance speech, to be moved to VyStar Veterans Memorial Arena in Jacksonville, Florida. Due to contractual obligations, official convention business will still be conducted in Charlotte.[296]

This is an overview of the money used by each campaign as it is reported to the Federal Election Commission (FEC) and released on February 20, 2020. Totals raised include loans from the candidate and transfers from other campaign committees. The last column, Cash On Hand (COH), shows the remaining cash each campaign had available for its future spending as of January 31, 2020.