General elections were held in Peru on 10 April 2016 to determine the president, vice-presidents, composition of the Congress of the Republic of Peru and the Peruvian representatives of the Andean Parliament.

In the race for the presidency, incumbent President Ollanta Humala was ineligible for re-election due to constitutional term limits. Popular Force candidate Keiko Fujimori, daughter of former President Alberto Fujimori, was the leading candidate in the first round with almost 40 per cent of the vote, but fell short of the 50 per cent majority required to avoid a second round. Peruvians for Change candidate Pedro Pablo Kuczynski narrowly beat Broad Front candidate Verónika Mendoza to finish in second and earn a place in the second round. The run-off was held on 5 June 2016. With support from those opposing Fujimori, Kuczynski won by a narrow margin of less than half a percentage point. He was sworn in as President on 28 July.

In the Congressional elections, Popular Force won in a landslide, receiving more than a third of the vote and winning an absolute majority of 73 out of 130 seats. Peruvians for Change with 18 seats and Broad Front with 20 seats emerged as the main opposition blocs.

On 13 November 2015, incumbent President Ollanta Humala called for a general election to be held on 10 April 2016. He said that he would respect the constitutional term limit restrictions and would not run again.[1]

The President was elected using the two-round system. The 130 members of the Congress of the Republic were elected in 25 multi-member constituencies using open list proportional representation.[2]

In March 2016, presidential candidates Julio Guzmán from All for Peru and César Acuña Peralta from Alliance for Progress were barred from the elections; Guzmán due to a violation of party rules in the party's internal election and Acuña Peralta due to monetary giveaways during a campaign rally, a violation of an electoral law enacted by Congress in November 2015.[3]

Keiko Fujimori was a highly polarizing figure during the election. The daughter of the controversial former president Alberto Fujimori, who was serving time in prison at the time, she was popular among the poor and loyalists who credit her father with the defeat of Shining Path. This popularity allowed her to win in the first round of the presidential elections. She was viewed unfavorably by a number of people who oppose Fujimori for human rights abuses and corrupt practices, and who feared that her victory would mark a return of Fujimorismo. Mendoza, who placed third and could not stand in the runoff election, gave her full endorsement to Kuczynski, in order to prevent Fujimori's victory.[4]

The following gained less than 5% in the last approval ratings, below the Election threshold or valla electoral. 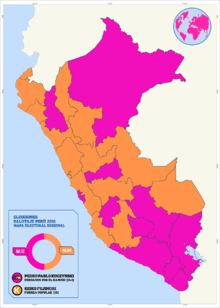 The second round was held on 5 June. Exit polls indicated that Pedro Pablo Kuczynski held a slight lead over Keiko Fujimori. As counting continued, the gap narrowed significantly. Preliminary results gave Kuczynski a 0.25 per cent advantage over Fujimori, with less than 50,000 votes between them. Approximately 50,000 votes were challenged during the count.[12] Fujimori conceded the election to Kuczynski on 10 June.[13]

Popular Force won in a landslide, taking more than a third of the vote and an absolute majority of 73 out of 130 seats. Behind them in opposition, Peruvians for Change with 18 seats and Broad Front with 20 seats. Other parties which gained representation in Congress include Alliance for the Progress of Peru (9 seats), Popular Alliance (5 seats) and Popular Action (5 seats).[14]