2-in-1 PCs consist of portable computer components within light and thin chassis, and exemplify technological convergence. They are convenient for media consumption and non-intensive tasks in tablet mode yet useful for content production in laptop mode.[2] 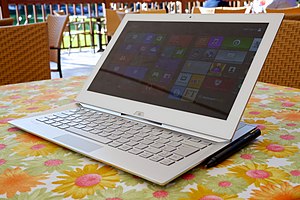 Sony VAIO Duo, an example of a 2-in-1 convertible with a sliding keyboard

2-in-1 convertibles are tablets with the ability to rotate, fold, or slide the keyboard behind the display. On most devices, the hinge is situated at the display and keyboard junction. However, the Dell XPS Duo is unique in that the display sits in a frame that allows the screen to be spun.[4]

When connected to the keyboard, the display of the detachable can either be free-standing on the hinge[8] or require external support, often in the form of a kickstand.[9][10] Novel ways of providing external support include the bending frame and locking mechanism of the HP Spectre x2.[citation needed]

Though the keyboard is usually bundled with the purchase of a 2-in-1 detachable,[11][12][13][14] it is occasionally deemed an optional accessory by manufacturers in order to minimize the starting price of a device.[15] In such cases the 2-in-1 detachable is often displayed with its complementary keyboard in advertisements and promotional materials. This is true for all devices of the Surface and Surface Pro lines.[16][17][18]

Distinction from traditional tablets and laptopsEdit 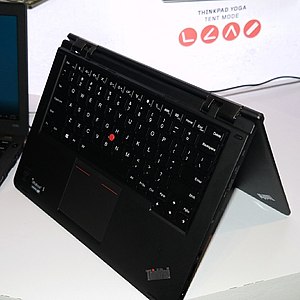 2-in-1s fall in the category of hybrid or convertible tablets but are distinct in that they run a full-featured desktop operating system and have I/O ports typically found on laptops, such as USB and DisplayPort.[19][20][21] The most prominent element is the keyboard that allows the 2-in-1 to provide the ergonomic typing experience of a laptop.

While 2-in-1s fall in a category distinct from laptops, they loosely parallel the traits of the Ultrabook device category, having light and thin chassis, power-efficient CPUs, and long battery lives.[22] They are distinguished from traditional Ultrabooks by the inclusion of a touchscreen display and a concealable or detachable keyboard. 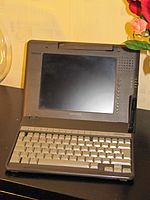 The Compaq Concerto, one of the earliest examples of a 2-in-1 PC.
File:Lenovo Yoga 3 Pro.jpg
Lenovo Yoga, an example of a laptop with a keyboard that can be rotated at any angle

The earliest device that can be considered a 2-in-1 detachable is the Compaq Concerto from 1993. It came preinstalled with Windows 3.1 and Windows for PEN, and had a cabled detachable keyboard, and battery powered stylus.[23]

Mainstream attention for 2-in-1 PCs was not achieved until nearly two decades later, when many manufactures showed devices, at that time referred to as "hybrid" devices, at CES 2011.[24] [25] While Packard Bell, Acer and HP all had Microsoft Windows based 2-in-1s by 2011,[26] Lenovo released the first well reviewed[27] Windows 2-in-1: The X220t variant of the ThinkPad X220. The 13-inch device included a digital stylus housed within the chasis, somewhat ruggedized construction, and a multi-touch screen with a twist and fold hinge.[28]

Samsung entered the 2-in-1 PC market with the release of the Windows-based Samsung Galaxy TabPro S, which was released in March 2016.[30] It had a 12-inch display, Intel Core m3 CPU, a first-party keyboard attachment, and a TabPro Pen. Its successor, the Galaxy Book, was released in February 2017. Coming in a 10.6-inch model and a 12-inch model, the Galaxy Book has an improved detachable keyboard and include an S Pen.[31]

Google entered the 2-in-1 market after it announced the Pixel Slate in October 2018.[32] It runs on Chrome OS and features a 12.3-inch display. It includes two USB-C ports, but it omits the headphone jack. The featured Pixel Keyboard and Pixelbook Pen are sold separately.

Since 2012, a number of other prominent laptop manufacturers, such as Dell, Asus, and Sony have also begun releasing their own 2-in-1s.[2]

While the iPad Pro has optional Smart Keyboard and Apple Pencil accessories, Apple has yet to release a true 2-in-1 PC with a full desktop OS, citing the quote below.

In April 2012 Apple's CEO Tim Cook, answering to the question of the researcher Anthony Sacconaghi about a possible hybrid of iPad and MacBook, compared a 2-in-1 to a combination of "a toaster and a refrigerator" that "doesn’t please anyone":

I think, Tony, anything can be forced to converge. But the problem is that products are about trade-offs, and you begin to make trade-offs to the point where what you have left at the end of the day doesn’t please anyone. You can converge a toaster and a refrigerator, but those things are probably not going to be pleasing to the user … you wouldn’t want to put these things together because you wind up compromising in both and not pleasing either user. Some people will prefer to own both, and that’s great, too. But I think to make the compromises of convergence, so — we’re not going to that party. Others might. Others might from a defensive point of view, particularly. But we’re going to play in both.[33]

2-in-1s are natively supported by the Windows 8, 8.1 and 10, and Chrome OS operating systems. Various other Linux distributions also support some touch features of 2-in-1s, though they are generally unsupported by hardware vendors.[34][35]