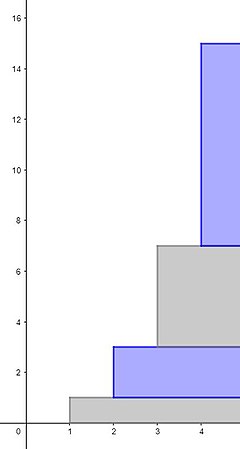 In mathematics, 1 + 2 + 4 + 8 + ⋯ is the infinite series whose terms are the successive powers of two. As a geometric series, it is characterized by its first term, 1, and its common ratio, 2. As a series of real numbers it diverges to infinity, so in the usual sense it has no sum. In a much broader sense, the series is associated with another value besides ∞, namely −1, which is the limit of the series using the 2-adic metric.

Therefore, any totally regular summation method gives a sum of infinity, including the Cesàro sum and Abel sum.[1] On the other hand, there is at least one generally useful method that sums 1 + 2 + 4 + 8 + ⋯ to the finite value of −1. The associated power series

An almost identical approach (the one taken by Euler himself) is to consider the power series whose coefficients are all 1, i.e.

and plugging in y = 2. These two series are related by the substitution y = 2x.

The fact that (E) summation assigns a finite value to 1 + 2 + 4 + 8 + … shows that the general method is not totally regular. On the other hand, it possesses some other desirable qualities for a summation method, including stability and linearity. These latter two axioms actually force the sum to be −1, since they make the following manipulation valid:

The above manipulation might be called on to produce −1 outside the context of a sufficiently powerful summation procedure. For the most well-known and straightforward sum concepts, including the fundamental convergent one, it is absurd that a series of positive terms could have a negative value. A similar phenomenon occurs with the divergent geometric series 1 − 1 + 1 − 1 + ⋯, where a series of integers appears to have the non-integer sum 1/2. These examples illustrate the potential danger in applying similar arguments to the series implied by such recurring decimals as 0.111… and most notably 0.999…. The arguments are ultimately justified for these convergent series, implying that 0.111… = 1/9 and 0.999… = 1, but the underlying proofs demand careful thinking about the interpretation of endless sums.[4]

It is also possible to view this series as convergent in a number system different from the real numbers, namely, the 2-adic numbers. As a series of 2-adic numbers this series converges to the same sum, −1, as was derived above by analytic continuation.[5]