The 10,000 metres or the 10,000-metre run is a common long-distance track running event. The event is part of the athletics programme at the Olympic Games and the World Athletics Championships, and is common at championship level events. The race consists of 25 laps around an Olympic-sized track. It is less commonly held at track and field meetings, due to its duration. The 10,000-metre track race is usually distinguished from its road running counterpart, the 10K run, by its reference to the distance in metres rather than kilometres.

The 10,000 metres is the longest standard track event. The international distance is approximately 6.2137 miles (or approximately 32,808.4 feet). Most of those running such races also compete in road races and cross country events. 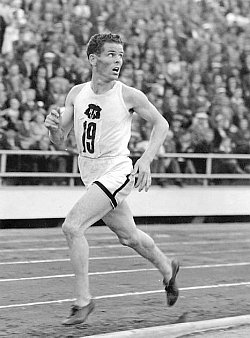 Taisto Mäki from Finland breaks the 30-minute barrier in Helsinki on 17 September 1939.

Added to the Olympic programme in 1912, athletes from Finland, nicknamed the "Flying Finns", dominated the event until the late 1940s. In the 1960s, African runners began to come to the fore.[1] In 1988, the women's competition debuted in the Olympic Games.

The 10,000 metres demands exceptional levels of aerobic endurance, and elite athletes typically train in excess of 160 km (100 miles) a week.[3]