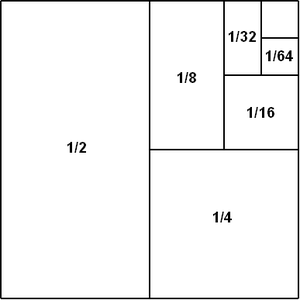 First six summands drawn as portions of a square.

The geometric series on the real line.

In mathematics, the infinite series 1/2 + 1/4 + 1/8 + 1/16 + ··· is an elementary example of a geometric series that converges absolutely. The sum of the series is 1. In summation notation, this may be expressed as

The series is related to philosophical questions considered in antiquity, particularly to Zeno's paradoxes.

As with any infinite series, the sum

The parts of the Eye of Horus were once thought to represent the first six summands of the series.[2]

In a myriad ages it will not be exhaustedEdit

A version of the series appears in the ancient Taoist book Zhuangzi. The miscellaneous chapters "All Under Heaven" include the following sentence: "Take a chi long stick and remove half every day, in a myriad ages it will not be exhausted."[citation needed]