"Deck the Halls" (originally titled "Deck the Hall") is a traditional Christmas carol. The melody is Welsh, dating back to the sixteenth century,[1] and belongs to a winter carol, "Nos Galan", while the English lyrics, written by the Scottish musician Thomas Oliphant, date to 1862.

"'Tis the season" redirects here. For other uses, see 'Tis the Season.
File:Original printed version of Deck the Hall with Boughs of Holly.pdf
Thomas Oliphant's original English words as they appear in "Welsh Melodies With Welsh and English Poetry" (volume 2), published in 1862

The English-language lyrics were written by the Scottish musician Thomas Oliphant. They first appeared in 1862, in volume 2 of Welsh Melodies, a set of four volumes authored by John Thomas, including Welsh words by John Jones (Talhaiarn) and English words by Oliphant.[2] The repeated "fa la la" goes back to the earlier Welsh and may originate from medieval ballads.[citation needed] The lyrics run as follows:

<poem>Deck the hall with boughs of holly,

The phrase "'Tis the season", from the lyrics, has become synonymous with the Christmas and holiday season.[3][4] 'tis being an archaic contraction of "it is".[3]

In the original 1862 publication, Oliphant's English lyrics were published alongside Talhaiarn's Welsh lyrics. Although some early sources state that Oliphant's words were a translation of Talhaiarn's Welsh original,[5] this is not the case in any strict or literal sense. The first verse in Welsh, together with a literal English translation taken from Campbell's Treatise on the language, poetry, and music of the Highland Clans (1862), is given for comparison:[6] <poem lang="cy" style="float:left;">Goreu pleser ar nos galan, Tŷ a thân a theulu diddan, Calon lân a chwrw melyn, Pennill mwyn a llais y delyn,</poem> <poem style="margin-left:2em; float:left;">The best pleasure on new year's eve, Is house and fire and a pleasant family, A pure heart and brown ale,

A gentle song and the voice of the harp</poem>

A variation of the lyrics appears in the December 1877 issue of the Pennsylvania School Journal.[7] This version, in which there is no longer any reference to drinking, runs as follows:[8]

<poem>Deck the hall with boughs of holly,

'Tis the season to be jolly, Don we now our gay apparel, Troll the ancient Christmas carol,

See the blazing yule before us, Strike the harp and join the chorus. Follow me in merry measure, While I tell of Christmas treasure,

Fast away the old year passes, Hail the new, ye lads and lasses! Sing we joyous all together,

Heedless of the wind and weather,</poem> 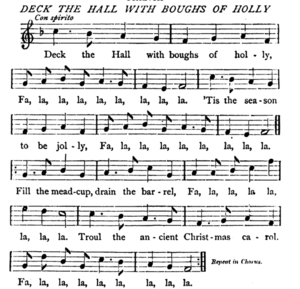 The Pennsylvania version from 1877 omits the third "Fa la la" line (which corresponds to the instrumental flourish in the Welsh original).

The third and fourth "Fa la la" lines sung to the words "Deck the Hall" differ from those sung or played in Wales, the fourth having a more arpeggiated melody in the Welsh version and the third differing in both melody and rhythm.

The tune is that of an old Welsh air, first found in a musical manuscript by Welsh harpist John Parry dating back to the 1700s[citation needed]. Poet John Ceiriog Hughes later wrote his own lyrics. A middle verse was later added by folk singers. In the eighteenth century the tune spread widely, with Mozart allegedly using it in his 18th violin sonata (1778)[12] and later Haydn arranged it in under the Welsh title, "Nos galan" (Hob. XXXIb:29, 1803).

In 1912, Ruth Herbert Lewis made a wax cylinder recording of a Welshman named Benjamin Davies singing a song, "Can y Coach faier", which uses the old melody now associated with "Deck the Halls". The recording can be heard on the British Library Sound Archive website.[13]

The Welsh and English lyrics found in the earliest publication of the "Nos Galan" melody are as follows:[14]