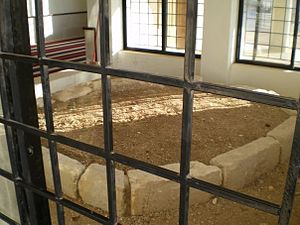 The grave from inside

His parents were both from the Zuhra clan of the Quraysh tribe in Mecca. His father was 'Awf ibn 'Abd-'Awf and his mother was al-Shifaa bint 'Awf.[1]:94

Abu Bakr spoke to 'Abd al-Rahman about Islam, then invited him to meet Muhammad, who heard his declaration of faith and taught him the Islamic prayers. This was before the Muslims had entered the house of Al-Arqam; 'Abd al-Rahman was one of the first eight men to accept Islam.[3]:115–116[4]

From about 614 the pagan Quraysh in Mecca "showed their enmity to all those who followed the apostle; every clan which contained Muslims was attacked."[3]:143 The usual threat to Muslim merchants was: "We will boycott your goods and reduce you to beggary."[3]:145

'Abd al-Rahman was one of a pioneering party of fifteen Muslims who emigrated to Abyssinia in 615. Other Muslims joined them later, forming a group of over a hundred. "They were safely ensconced there and grateful for the protection of the Negus; so they could worship Allah without fear, and the Negus had shown them kind gesture and warm hospitality as was foretold by the prophet even before they departed."[3]:148 In late 619 or early 620 "they heard that the Meccans had accepted Islam." This turned out not to be entirely true, however a fair number of people did accept Islam as a result of the Conversion of Both Umar ibn Khattab and the prophet's own paternal uncle, the Lion himself, Hamza ibn Abdulmuttalib. 'Abd al-Rahman was one of forty who "set out for the homeland. But when they got near Mecca they learned that the report was false, so that they entered the town under the protection of a citizen or by stealth."[3]:167–168

In 615 he migrated to Abyssinia and In 622 'Abd al-Rahman joined the general emigration of Muslims to Medina, where he lodged with Saad ibn Al-Rabi[3]:218 until he could re-establish his business.

The two met again in the Battle of Badr in March 624.

On the day (of the battle) of Badr, when all the people went to sleep, I went up the hill to protect him. Bilal(1) saw him (i.e. Umaiya) and went to a gathering of Ansar and said, "(Here is) Umaiya bin Khalaf! Woe to me if he escapes!" So, a group of Ansar went out with Bilal to follow us ('Abdur-Rahman and Umaiya). Being afraid that they would catch us, I left Umaiya's son for them to keep them busy but the Ansar killed the son and insisted on following us. Umaiya was a fat man, and when they approached us, I told him to kneel down, and he knelt, and I laid myself on him to protect him, but the Ansar killed him by passing their swords underneath me, and one of them injured my foot with his sword. (The sub narrator said, " 'Abdur-Rahman used to show us the trace of the wound on the back of his foot.")

Sunnis tend to view this as Sahih and have included it in Sahih Bukhari [6].

Abd al-Rahman was one of those who stood firmly beside Muhammad at the Battle of Uhud when most of the warriors fled.[1]:98

In August 626 Muhammad directed 'Abd al-Rahman ibn Awf to raid the Kalb tribe in Daumatul-Jandal, instructing him: “Take it, Ibn Awf; fight everyone in the way of Allah and kill those who disbelieve in Allah. Do not be deceitful with the spoil; do not be treacherous, nor mutilate, nor kill children. This is Allah's ordinance and the practice of His prophet among you.” Muhammad also instructed him on the correct way to wind a turban.[3]:672 'Abd al-Rahman defeated the Kalbites and extracted from them their declaration of Islam and the payment of the jizya. He then sealed the alliance by marrying the chief's daughter Tamadur bint Al-Asbagh and bringing her back to Medina.[7]:207–208

Role in successions to the CaliphateEdit

In August 634 the dying Caliph Abu Bakr called in 'Abd al-Rahman and Uthman to inform them that he had designated Umar ibn al-Khattab as successor.[citation needed]

In 644 the dying caliph Umar nominated a board of six members (the Council of Shura) to elect one of themselves as the next caliph. The group consisted of Sad Ibn Abi Waqqas, Abd al-Rahman ibn Awf, Zubayr ibn al-Awwam, Talha ibn Ubayd Allah, Ali ibn Abi Talib and Uthman ibn Affan. Uthman was chosen as the third caliph by 'Abd al-Rahman ibn 'Awf.[8]

His sister was married to Bilal Ibn Rabah.[citation needed]

'Abd al-Rahman was known as a business sensation in world.[10][11] When he was asked about the secret of his success, he replied that he never lifted a stone unless he expected to find gold or silver under it.[1]:96

Many stories are told of 'Abd al-Rahman's personal generosity. He once furnished Muhammad's army with 1,500 camels.[citation needed] He bequeathed 400 dinars to the survivors of Badr and a large legacy to the widows of Muhammad.[citation needed] One day he brought a caravan of 700 merchant-camels into Medina. Aisha remarked, "I have heard the Allah's Messenger say: 'I have seen 'Abd al-Rahman ibn Awf entering Paradise crawling.'" This was repeated to 'Abd al-Rahman, who replied: "If I could, I would certainly like to enter Paradise standing. I swear to you, yaa Ammah, that this entire caravan with all its merchandise, I will give in charity." And so he did.[12]

'Abd al-Rahman ibn 'Awf was tall and bent-backed with a fine, light, rosy complexion and a handsome face. In old age he did not dye his hair.[1]:101 Other descriptions refer to his curly hair; lustrous, long-lashed eyes; convex nose; somewhat protruding upper teeth; thick hair under the earlobes; long, elegant neck; and thick, masculine hands and fingers.[citation needed] He had a limp due to the wounds that he incurred at the Battle of Uhud.[citation needed]

Sunnis regard him as one of the al-asharatu-l mubashshirin, the ten people whom Muhammad personally assured of entering Paradise.[citation needed]